Tennis prospect’s star on the rise

Tennis prospect’s star on the rise 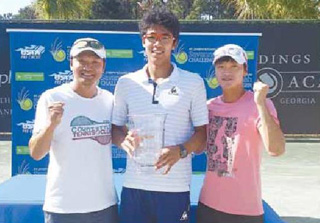 Korean tennis prospect Chung Hyeon won the Savannah Challenger on Sunday and became second Korean to be in the top 100 in the Association of Tennis Professionals (ATP) rankings.

The 18-year-old Samil Technical High School student started the ATP Challenger Tour event as No. 107, but gained 80 points to move up to No. 88.

Chung is three-time champion on the ATP Challenger Tour. According to the ATP, he also is the first player to reach 20 match wins on the circuit in 2015 and joins Benoit Paire and Kimmer Coppejans as the only players to claim multiple titles. Chung’s latest ATP Challenger victory was Feb. 2 in Burnie, Australia.

“I’m really happy because it’s my first Challenger Tour title on a clay court,” Chung told the Korea Tennis Association (KTA). “I tried not to think about rankings, but as I got closer to 100, there was pressure. I didn’t want to miss the opportunity.”

Chung will return to Korea to play for ATP Busan Open that starts Saturday.

Yoon Yong-il, who coaches Chung, said that because of the rapid progress of the Suwon-born prospect, they are considering competing in the ATP World Tour, the top tier of men’s tennis.

“We are very happy to wrap up the five-week schedule in the U.S. with a win,” he said. “We are returning home with experience and confidence to play against top players.”

Chung started playing tennis at age of 6, following his parents’ advice to help his weak eyesight.

After winning the both the 12’s Eddie Herr and Jr. Orange Bowl, in 2013, Chung emerged as a top prospect after becoming the first Korean to advance to a men’s singles final at the Wimbledon Junior Championship.

Last year in Bangkok, Chung became the youngest Korean to win on the men’s ATP Challenger Tour. He also won a gold medal in men’s doubles with Lim Yong-kyu at the 2014 Asian Games.

The company signed a three-year sponsorship deal with Chung to provide him with 50 million won ($46,583) per year and promised to cover more than 300 million won worth of costs for coaching and other expenses.

The KTA then appointed Yoon as Chung’s personal coach and Kim Tae-hwan as his personal trainer to support the 183-centimeter (6-foot) player.