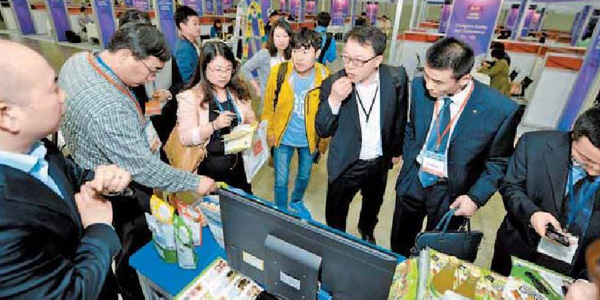 Chinese buyers inspect products presented by a Korean manufacturer at the Korea-China Free Trade Agreement Business Plaza on Monday at Kintex in Ilsan, Gyeonggi. Representatives from about 360 Chinese companies attended the event hosted by the Korea Trade-Investment Promotion Agency. Provided by Kotra

Five Kotra China branch heads gathered at the JoongAng Ilbo office in central Seoul on Sunday to discuss new strategies for export companies that want to build business relationships in China under the FTA.

Another point the Kotra office heads emphasized was to understand the urbanization of Chinese society, which is quickly expanding to the central and western parts of the country. Beijing has decided to spend at least 7,000 trillion won ($6.5 trillion) in urban development and infrastructure projects under the leadership of Premier Le Keqiang. This opens a vast array of business opportunities for Korean companies, they said.

“Major cities of central and western China like Chengdu, Xian and Wuhan are changing so quickly that people often describe them as cities where new buildings appear overnight,” said Jang of Chengdu office. “This means that demand for derivative industries, like construction materials, home appliances and consumer products, is also on the rise. The Chinese central government wants foreign companies to settle there.”

One of infrastructure projects being pushed there is the so-called “One Belt, One Road” project, which the central government launched in 2013 to eventually connect China’s eastern cities to Central Asia, Africa and Europe countries.

“Projects like this are closely related to the Asia Infrastructure Investment Bank, which Korea recently joined, and therefore hold large business potential, particularly in areas like infrastructure construction, shipping, retail and tourism.” said Park of the China business support division.

Another tip from Kotra’s China office chiefs is to focus on services and e-commerce, as urban Chinese in their 20s and 30s have emerged as a new large consumer group.

“Young people born in the 1980s and 1990s are the new big pockets who care more about innovation and design than price, and prefer to shop online,” said Yoon Hyo-choon, head of Kotra’s Beijing office, adding that targeting the requires Korean companies to provide more convenient e-commerce services.

“Even if a company already has retail route in China, it should additionally strengthen online business by launching online-exclusive products,” said Lee Min-ho, head of the Shanghai office.