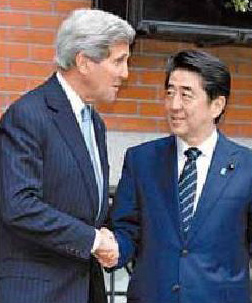 As he begins his high-profile trip to the United States, Japanese Prime Minister Shinzo Abe will sign on to newly revised bilateral defense guidelines, a part of the Japanese leaders’ broader military ambitions.

These guidelines were revised for the first time in 18 years and strengthen the two countries’ bilateral alliance by expanding the scope of the Japanese Self-Defense Forces’ capabilities so it can have a larger role in global security.

This comes as China moves to modernize and build up its military, as the two countries continue to dispute a set of islands in the East China Sea.

Prime Minister Abe has been trying to legalize Japan’s rights to collective self-defense, or the right to wage war outside its borders, which was forbidden under its post-war pacifist constitution written by the United States. To do so, he needs to gain two-thirds approval by the Japanese Diet and a majority vote by citizens in a referendum.

The updated version of the U.S-Japan defense guidelines from 1997 will get rid of geographical constraints for Japan’s Self-Defense Forces and touch on various scenarios including Tokyo’s response to a latent threat against Japan’s peace and security or an armed attack on the country, and how it can come to the assistance in the case of an attack on nations other than Japan.

Before departing for Boston on Sunday, Abe told reporters at Haneda Airport in Tokyo, “I hope to send a message for the creation of peace and prosperity in the 21st century and open a new era by taking advantage of the strong Japan-U.S. bond.”

This is the first official visit by an incumbent Japanese prime minister to the United States in nine years.

There is interest to see whether and how Abe will address Japan’s World War II aggression and history issues during this trip.

He will have ample opportunities to reach out to the U.S. public through speeches at Harvard’s Kennedy School of Government and before Congress, a joint press conference with President Barack Obama, and visits to the Holocaust Memorial Museum and Arlington National Cemetery.

Abe will become the first Japanese prime minister to address a joint session of the U.S. Congress on Wednesday. He was set to speak to students and professors at Harvard University in Boston on Monday, the first leg of a trip that also takes him to Washington, San Francisco and Los Angeles.

He returns to Tokyo on Saturday.

In addition to cementing the two countries’ alliance in his talks with President Barack Obama on Tuesday, Abe is expected to emphasize the strategic importance of the U.S.-led Trans-Pacific Partnership, though White House officials doubt there will be any breakthrough on that initiative.

Leading up to his visit, U.S. lawmakers, scholars and media have called upon Abe to address history issues with sincerity and clearly apologize for Japan’s wartime atrocities, namely its military’s forceful recruitment of young women into sexual slavery before and during World War II.

Some analysts say that Japan is manipulating diplomacy to drive a wedge between Korea and the United States. Instead of the trilateral cooperation framework pushed by the U.S. among Seoul, Washington and Tokyo, the Abe administration is bolstering security cooperation with the U.S. and other Asia-Pacific countries, namely Australia and India.

Tokyo has also tried taking a leadership role in the Asean countries.

Abe is looking for assurance that Washington will come to Tokyo’s aid should a military clash break out with China, according to experts.

Lee Myun-woo, vice president of the Seoul-based think tank Sejong Institute, told the JoongAng Ilbo ahead of Abe’s visit that “Japan is trying to use the history issue with Korea and China in order to secretively convey to the U.S. its mistrust of Korea. Through mixing the Korea-U.S.-Japan security issue with the history issue, it is trying to gain by proposing a U.S.-and-Japan versus Korea-and-China scheme.”

Seoul has generally emphasized a two-track policy separating history from other issues such as security. However, the right-wing Japanese government’s refusal to acknowledge its wartime actions while also building up its military leaves Korea feeling uneasy.

“Because diplomacy with Japan is stuck, [Korea’s] diplomacy toward the United States and China, the three axes [of Korean diplomacy], are all shaken,” said Cho Yang-hyun, a professor at the Korea National Diplomatic Academy. “We need to establish a diplomatic strategy that reads the changes in Japan and examines bilateral and multinational, the past and the future.”