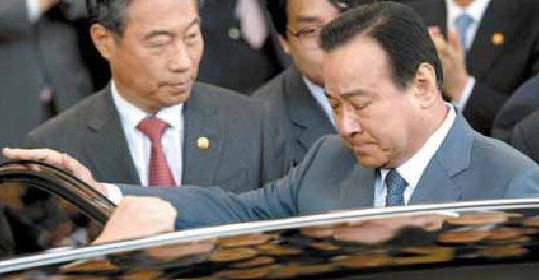 Outgoing Prime Minister Lee Wan-koo bid farewell to his staff after his departure ceremony Monday in the Central Government Complex in Seoul.[NEWSIS]

On the day of her return to Korea from a trip to four Latin American countries, President Park Geun-hye on Monday accepted the resignation of her embattled prime minister, who is directly implicated in an ongoing scandal.

Presidential spokesman Min Kyung-wook said Park did not make any other remarks when she accepted Prime Minister Lee Wan-koo’s resignation. Lee tendered his resignation on April 20, a week ago, as he was implicated in a snowballing payoff scandal. At 6:10 p.m. on Monday, Lee attended his departure ceremony.

Earlier in the day, there was speculation that Park would postpone a decision on the fate of her prime minister as she was too exhausted by travel fatigue to immediately tackle state affairs. Min said Park had a checkup after she arrived in Seoul after complaining about stomach cramps and a sore throat. A medical team advised her to rest for at least one or two days. Min said that Park will make decisions on pending issues as soon as she recovers from the fatigue of her trip. A Blue House official said Park could not delay her decision on the prime minister any longer because it would cause the confusion in state affairs.

Before she left for Latin America on April 16, Park told the head of the ruling Saenuri Party, Kim Moo-sung, that she would decide the fate of Lee after her trip. Lee offered to step down on April 20 over the payoff scandal involving construction tycoon Sung Wan-jong, who committed suicide on April 9 after he was investigated for corruption.

Shortly before his apparent suicide, Sung dropped a series of bombshell revelations that he had paid off Park’s inner-circle for years. In addition to Lee, Sung claimed that he had paid top members of the Park government including the current and former Blue House chiefs of staff and also provided illegal money to the president’s 2007 primary and 2012 election campaign.

It remains to be seen if Park will preside over a cabinet meeting scheduled for today. Demands have grown from the ruling party that Park should chair the meeting and start turning around the plummeting popularity of the president and the ruling party on the eve of Wednesday’s by-elections for four National Assembly seats.

“Her hypocritical treatment of the scandal as if it is someone else’s business doesn’t square with her duty to the people,” Moon said. “She must issue a true apology to the people since the corruption scandal is related to her primary and presidential campaigns.”

Moon said she also must guarantee a fair investigation into the scandal.

Last week, Moon, who was narrowly defeated by Park in the 2012 presidential election, asked Park to accept his plan to appoint an independent counsel to investigate the scandal including her campaign funds.

Demands for an apology by the president also grew inside the ruling party. “The people want to hear the president’s honest voice on this scandal,” Saenuri Party’s floor leader Yoo Seong-min said Monday.

“I expect the president to issue a candid message directly to convince the people.”

First-term and second-term lawmakers of the ruling party also demanded that Park issue an apology.

Even before her departure, Park was criticized for the miserable timing of Latin America trip. Her decision to embark on the first anniversary of the Sewol’s sinking, in which more than 300 died, fueled the impression that she was indifferent to the tragedy.

In the middle of her trip, Park’s prime minister offered to step down and there was a major breakthrough in regional diplomacy.

Chinese President Xi Jinping and Japanese Prime Minister Shinzo Abe held rare talks Wednesday on the sidelines of the Asian-African Conference in Jakarta, Indonesia, leaving Seoul concerned it may become the odd one out amid the delicate diplomatic situation in Northeast Asia.

The meeting took place during the Bandung Conference, which Park, who has yet to hold a summit with Abe, chose to not attend.

Another important diplomatic development also took place last week while Park was out of the country.

After four-and-a-half years of negotiations, Seoul and Washington signed a new bilateral nuclear cooperation accord allowing more leeway than its predecessor, including a mechanism to enable Korea to enrich uranium and use spent fuel for research purposes.

The agreement was rewritten for the first time in 42 years while Park and her foreign minister, Yun Byung-se, were both in Latin America.