Document from 1919 tells of Japan’s sexual assaults in Korea

Document from 1919 tells of Japan’s sexual assaults in Korea 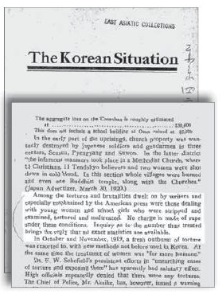 In the 27-page depiction of the sociopolitical conditions of Korea after the March 1st Independence Movement in 1919, a major independence movement against colonial rule, Japanese police officers are described as suppressing all kinds of public demonstrations through practices that are “widely condemned.”

An excerpt from the report entitled “The Korean Situation: An Authentic Account of Recent Events by Eye Witnesses” (1919) goes as follows:

“Among the tortures and brutalities dwelt on by writers and especially emphasized by the American press were those dealing with young women and school girls who were stripped and examined, tortured and maltreated. No charge is made of rape under these conditions. Inquiry as to the number thus treated brings the reply that no exact statistics are available.”

It did not provide further details of the assaults.

The document, issued by the Commission on Relations with the Orient of the Federal Council of the Churches of Christ in America, reported that “high officials repeatedly denied that there were any tortures.”

Based on testimonies from teachers and pupils at one local school, “A total of 46 were maltreated in one or more of the following ways: Slapping, punching, kicking, wrists twisted, an object inserted between the fingers and these pressed until the blood started,” the report read.

“We request drastic reformation of the laws relating to the establishment of houses of prostitution, and we protest against the system of prostitution as permitted and protected by the Government, and forced upon the Korean people, outraging their customs and feelings.”

Based in Manhattan, the Korean Methodist Church and Institute disclosed the report on Saturday local time and said it had been discovered from a closet in the church. Abe’s scheduled speech to Congress on Wednesday has prompted warnings from around the world that the outspoken conservative must seize the chance to offer his sincere apologies for his country’s wartime misdeeds.

The upcoming speech is expected to be closely monitored because it is the first a Japanese prime minister has ever been invited to give to a joint session of the U.S. Congress, whereas six Korean leaders, including President Park Geun-hye in 2013, were given the honor. The speech is also predicted to be a taste of the message Abe will deliver in August to commemorate the 70th anniversary of the end of World War II.