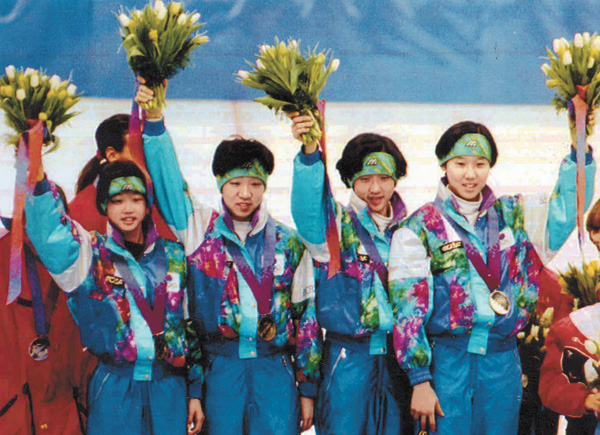 Chun Lee-kyung, second from left, celebrates with teammates after winning the 3,000-meter relay at the 1994 Lillehammer Winter Olympics. [JoongAng Ilbo]

Today, Korea is recognized as the world’s short track powerhouse, and Chun Lee-kyung paved the way.

Born in 1976 in Okcheon County, North Chungcheong, Chun was a sickly child, frequently in the hospital. Hoping she would get stronger, Chun’s parents sent her to a YMCA youth sports club.

She learned to swim at age 6 and was figure skating at the age of 7. It was not until four years later that she was introduced to short track skating and in only a year she was performing at a level comparable to that of high school boys. 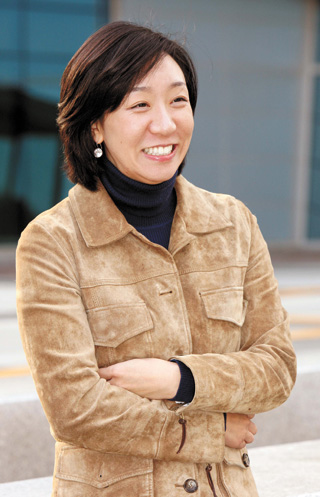 In 1988, even before going to middle school, Chun became youngest female member of the national team and worked out at the Taereung National Training Center in Seoul.

“Even at that time, I never thought I would be an athlete,” Chun said in a 2009 interview with the Korea Sports Promotion Foundation. “It sounds cocky, but I had talent in various fields, and if I wasn’t chosen to the national team I might have been a singer.”

Receiving professional training from such a young age, Chun’s career seemed bright from the beginning, but in middle school she suffered from spondylolysis, a rare spine disease, just as her rival and teammate Kim So-hee started to rise.

However, Chun didn’t give up. Through physiotherapy and training, she overcame the disease and steadily moved to the top of her sport. When she thought she was in a slump, the 163-centimeter (5-foot-4) skater just trained harder.

In the 1992 Winter Games in Albertville, France, Chun made her Olympic debut. Failing to medal only strengthened her resolve.

In 1993, she was runner-up at the World Short Track Speed Skating Championships in Beijing and started to build confidence for the 1994 Winter Olympics in Lillehammer, Norway.

Chun suffered an ankle injury just a month before the event, but her tenacious effort paid off. She helped the women’s team win the 3,000-meter event and won an individual gold medal in the 1,000-meter race by beating Nathalie Lambert of Canada. In doing so, Chun became the first Korean female skater to win two golds in the Winter Games.

She went on to receive the Blue Dragon of the Order of Sport Merit.

In the mid-1990s, Chun was the dominant force on the international short track scene as overall champion at the 1995 Worlds in Gjovik, Norway, and 1996 Worlds in The Hague, the Netherlands.

When Chun’s career seemed almost too easy, she started to see her biggest rival from China - Yang Yang (A) - rising on the international stage. In the 1997 Worlds in Nagano, Japan, Chun and Yang shared the title of overall champion, the third straight title for the Yonsei University graduate.

In the 1998 Winter Olympics in Nagano, all eyes were on Chun and Yang. On her first day, Chung competed in the women’s 500-meter, but was eliminated in the semifinals. When two skaters in the finals were disqualified, however, Chun ended up with a bronze medal, the first 500-meter medal in the history of Korean women’s short track.

Just like four years earlier, Chun again was pivotal in Korea winning win the 3,000-meter relay. But the highlight was the 1,000-meter final, where she had to defend her Olympic title against Yang Yang (A), Yang Yang (S) and teammate Won Hye-kyung.

In the race, Chun delivered one of the most memorable performances in the history of the Winter Olympics. Skating in last place throughout the race, with two laps left Chun passed Yang Yang (S) and in the final lap she beat Yang Yang (A) by thrusting out her foot at the finish line to win the gold medal by the length of a skate blade.

That made her the only Korean to win two gold medals in two consecutive Olympics.

Chun finished second to Yang Yang (A) in the 1998 Worlds in Vienna before announcing her retirement in 1999.

However, her relationship with sports didn’t end there.

During the 2002 Winter Olympics in Salt Lake City, she filed her candidacy to be a member of the International Olympic Committee (IOC), but failed to earn the spot. At the recommendation of IOC President Jacques Rogge, though, Chun was named to the IOC Athletes’ Commission.

While working as a sports administrator, she also pursued other athletic interests. In 2003, she acquired a semi-pro golf license after three attempts and in 2006 joined the national women’s ice hockey team. However, an injury caused her to miss the 2007 Winter Asian Games in Changchun, China.

Chun, who got married in 2010 and lives in Busan, now focuses on her role as a sports administrator while serving as a director at the Korea Skating Union. She also is an Athletes’ Committee member for Olympic Council of Asia as well as Korea Olympic Committee.

“As a skater, I was born with little talent and had to consistently work hard,” she said. “I know the power of effort more than anyone.”