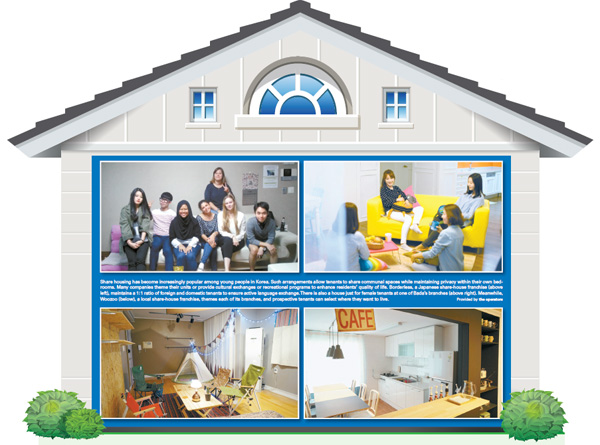 Share housing has become increasingly popular among young people in Korea. Such arrangements allow tenants to share communal spaces while maintaining privacy within their own bedrooms. Many companies theme their units or provide cultural exchanges or recreational programs to enhance residents’ quality of life. Borderless, a Japanese share-house franchise (top left), maintains a 1:1 ratio of foreign and domestic tenants to ensure active language exchange. There is also a house just for female tenants at one of Bada’s branches (top right). Meanwhile, Woozoo (above), a local share-house franchise, themes each of its branches, and prospective tenants can select where they want to live. Provided by the operators

Ryu Soo-hyeon, a 27-year-old Changwon native, spent the majority of her 20s living alone in Seoul.

“I didn’t like the sweeping darkness and the loneliness that followed when I returned to my one-room studio at night,” she said recently of her living arrangements.

Having resided over the past eight years in various types of single-person housing - a one-room studio, a dormitory and a boarding house - she encountered a number of shortcomings related to living alone, though the one aspect she disliked most was returning to an empty room at the end of the day with no one to welcome her.

But that concern was resolved a few months ago, when she moved into a house called Sozib, located in Mapo District, western Seoul, where she shares a multi-room house with other tenants around her age.

She now spends her free time socializing with her six roommates in their communal space - the living room and the kitchen - but at the same time doesn’t have to sacrifice her privacy, having her own separate bedroom.

Ryu’s situation is becoming increasingly common among young Koreans, leading to a rise in the number of people, specifically students and those in their 20s, seeking out share-housing.

This type of living arrangement has emerged as a popular alternative choice for young singletons residing in Seoul, particularly because tenants have a decent place to sleep as well as an outlet to relieve their loneliness and socialize.

From a financial perspective, a share house is a wise option for young people, many of whom are completing their studies or are new to the work force with unstable incomes. Unlike one-room studios or boarding houses, which require a lump sum deposit that ranges from 10 million won ($9,345) to 20 million won, a share house only asks for the first two months of rent in advance, which amounts to about 1 million won.

More than just a living

Perhaps the biggest advantage of living in a shared house is that tenants are able to make the most out of their time spent at home, rather than considering it as just a place to sleep.

Those in studios or single households, on the other hand, lack options for casual dinner conversation, ordering large-scale take-out or going for a quick drink. While possible, the circumstances make those activities more difficult.

According to Ryu, however, those kinds of social pursuits are available on a daily basis now that she lives in a share house. Birthday parties and day trips are also much easier to plan and attend.

“Our relationship is somewhere between friends and family,” she said of her roommates. “Even if there aren’t any special occasions, we come up with something to do and have our casual chit chats.”

Every first Thursday on the month, she and the other tenants meet to reflect on the house rules, like the dish-washing schedule, to make adjustments or revise any regulations if necessary.

On a whim, Ryu and peers also recently called an on-site fortune-teller to tell them their futures.

But in order to ensure these activities run smoothly and personalities jive, a certain level of screening for prospective tenants is required before anyone moves into the house.

According to Woozoo, a share-house franchise that recently opened its 18th branch in Guro District, southwestern Seoul, hobbies and lifestyles are crucial factors when receiving new tenants.

“Before the final contract is signed, we hold a little interview with the candidates so we can find out about their past living styles,” explained Shin Ye-ji, a PR manager for Woozoo.

“If the tenant doesn’t like to spend much time at home or hasn’t had any experience living with other people, it would be kind of challenging for them to adapt to our system,” she added.

Woozoo, which launched in 2012, categorizes its tenants according to their hobbies or professions so they can enjoy them together.

Their first branch, called Entrepreneur, which is situated in Jongno District, central Seoul, is equipped with big desks, computers and white boards that promote more active discussions among prospective tenants who aspire to start their own venture companies.

Fostering an atmosphere in which people can freely express their ideas - even if they don’t necessarily work together - was the primary concept behind the branch, according to the company.

The most recent branch in Guro District is geared toward cycling enthusiasts. A spacious outdoor terrace was specially installed at this house to serve as a bicycle park. It also has an extra bicycle available for rent for potential beginners.

“We don’t block an adequate tenant from moving in just because the specific concept of the branch doesn’t suit them,” Shin said. “But we try to fulfill their emotional needs as much as we can by providing a matching service for our customers.”

Another share-house operator, Borderless, a Japanese franchise introduced to Korea in 2012, actively promotes language and culture exchange among its international tenants.

All of its 23 branches have strict rules about maintaining the ratio of foreigners and Koreans 1:1.

Most of its foreign tenants are students or interns who have lived in Korea for less than a year. The company seeks to match Koreans and foreigners, with the idea that living under the same roof with native speakers is the best way to learn a new language. If a tenant seeks advanced language training, the house can also arrange one-on-one tutors as well.

“We hold various casual events where people from all of our branches are invited,” said Shin Song-I, the manager of the franchise. “People become friends with each other, which later leads to more active language exchange.

“Also, we have many branches in the Asian region, so we arrange house exchanges as well where our tenants can actually visit a foreign country and experience another culture.”

With multiple programs offered by the houses, the competition to get into one of the house’s branches is typically always high.

“There are constant inquiries about moving into an already full house,” a Borderless employee said.

A trendy interior with better security

Single people in their 20s or 30s most commonly live in share houses for the convenience, but that doesn’t mean their preferences fall by the wayside.

To meet their tastes, many share houses put a lot of effort in decorating and maintaining their interiors.

Woozoo, for instance, known for decorating each branch thematically, uses vibrant colors and accent pieces at each unit and has their own group of designers who regularly meet to come up with new ideas.

“From researching the demographics of the nearby neighborhood and its overall atmosphere, to staying attentive to ongoing trends, we put a lot of time and effort into making our houses look attractive,” Shin said. “Our concept is only reflected in the communal space, while the bedrooms are entirely up to the tenants.”

In addition to aesthetic features, practical conveniences are also provided.

Many one-room studios or boarding houses - the most common type of living arrangement among young people - are old or come unequipped with the necessary furniture or amenities.

Insulation in many standard dwelling units is subpar as well, making the winters especially tough.

However, share houses outsource such tasks to specialty companies, which maintain their units and keep them clean.

“I can say that my quality of life has enhanced three-fold since coming here,” said Ryu. “Before when I was living in one-room studio, I had to tape around the window frame to block any wind from coming inside.”

“But now there are no such problems at all,” added Ryu. “A cleaning service also comes twice a week.”

A rosy picture ahead

Compared to Japan and many European countries, where share-housing is common among young people, this type of living arrangement has caught on late Korea, mainly due to traditional attitudes that call for young people to continue living with their parents until marriage.

However, as more students become familiar with the idea, demand has begun to grow.

In 2012, the first share house of its kind was built under the name Mai Baum - it is now called Lofty - in Seodaemun District, central Seoul, an area with a high concentration of college students. And since then, the industry has rapidly grown.

“Share houses first came about due to space purposes, then networking purposes and now they are sought out for cultural exchanges,” said Choi Jung-min, an architecture professor at Konkuk University.

“Just as institutions like Airbnb and Uber saw explosive reactions for their sharing functions, share houses are likely to see a similar response,” he added.

Estimated share houses in Seoul currently number around 2,000 and are anticipated to rise from here on out.

With demand increasing, an evolved form of share housing is also expected.

“We are planning to generate other related businesses or services, not just dwellings - like providing [students and young people] with travel opportunities or study- abroad programs with affiliated businesses,” said Shin, from Woozoo. “But in order to do that, first there has to be a [cost advantage].”

Woozoo plans to expand to 40 branches by the end of this year.