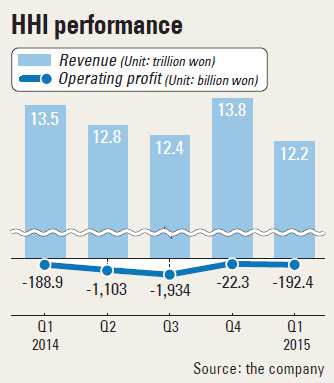 Hyundai Heavy Industries, the country’s No.1 builder by sales, extended its losses over the January-March period after the company was hit with reduced orders, corruption charges and friction with its labor union.

Sales also declined by 11.7 percent year on year to 12.2 trillion won in the first quarter, down from 13.5 trillion won.

The company said that the operating losses were the result of the huge number of retirement benefits it paid out to early retirees, but stressed that the situation was unlikely to reoccur.

It had resorted to accepting the voluntary retirement of 1,500 non-factory employees to reduce costs.

Hyundai also cited delays in deals, as the supplier clashed on several contract terms with contractors.

But there are other factors that were absent from the statement, like a slump in orders. The estimated value of the orders from this year’s Q1 is only about half of that from a year ago.

The company was also accused of carrying out underhanded dealings when it supplied naval vessels in a deal with the government between 2007 and 2009.

In the first three quarters of last year, the shipbuilder reported a net loss of 3.2 trillion won.

Samsung Heavy Industries, however, turned a profit this quarter.

The nation’s No. 2 builder generated 26.3 billion won in operating profit, a stark contrast from the 101.7 billion won it lost in the same period last year.

The company attributed the achievement to several big orders made in the first three months.

Sales, however, decreased to 2.6 trillion won, or a 23.9 percent decrease year on year.

Samsung expects sales will boost in the second quarter, as it has continued to win large deals.

It will be the world’s largest container vessel when it is completed.