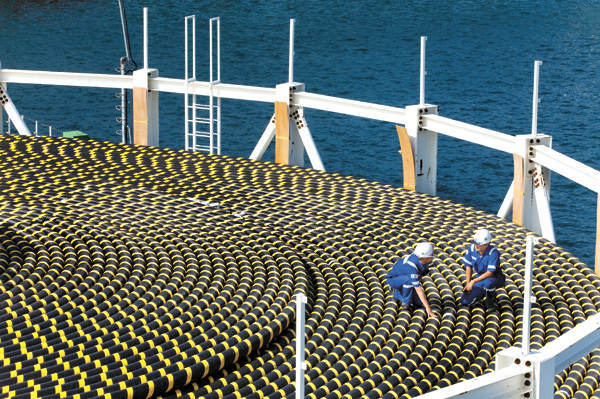 LS Cable & System engineers in Donghae, Gangwon, examine submarine cables to be supplied to Qatar. Provided by the company

LS Group is reaching out to new fields of business as well as new markets worldwide.

As a developer of electric power transmissions and telecommunications systems, materials and machinery, LS has long invested in acquiring cutting edge technologies.

In 2009, LS Cable & System built submarine cable construction facilities in Donghae, Gangwon. Submarine cables are essential to producing alternative energy and transferring electricity between countries, so developing the technology has been prioritized.

The corporation also possesses superconduction technologies. In 2004, Korea became the fourth country in the world to have these capabilities, thanks to LS Cable & System’s efforts. The achievement was especially notable since Korea was late to develop superconductors relative to other countries.

LSIS, another affiliate, has been investing in high voltage direct current technologies. Since 2013, it has been the preferred provider of technological expertise to KAPES, a joint venture coestablished by Korea Electric Power Corporation and Alstom, a French company.

This technology is especially important because it allows a large volume of electricity to be transferred across a long range, minimizing lost electricity and maximizing efficiency.

LSIS is also transforming electrical grids through the so-called Smart Grid system. With this modification, the supplier and the recipient of electricity can communicate with each other in real time.

LS Group’s other affiliates are innovating as well. LS-Nikko Copper was the first Korean company to export a precious metals production plant to Central and South America. Last year, a joint venture contract was signed with Chile’s public corporation, Codelco. Once construction finishes, 5 tons of gold, 540 tons of silver and 200 tons of selenium will be produced per year.

LS Mtron, developer of industrial machinery and parts, is investing in ecofriendly technologies that the European and U.S. markets demand. The company is also expanding into the promising markets of South America and Central Asia.

“A new industrial paradigm is imminent, as LS prioritizes the development of energy efficient technologies,” said LS Chairman Christopher Koo. “Meanwhile, the importance of ecofriendly development should not be neglected, since keeping up with trends will be key to achieving global competitiveness.”