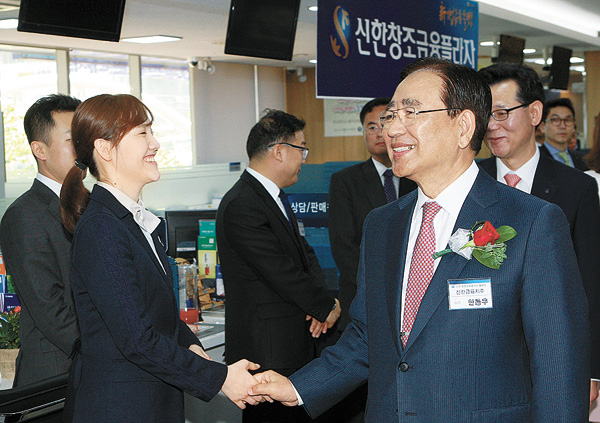 Han Dong-woo, chairman of Shinhan Financial Group, right, shakes hands with an employee at the Shinhan Creative Finance Plaza in Pangyo, Gyeonggi, at the launch of the branch on Tuesday. Provided by the bank

The group said Tuesday it opened Shinhan Creative Finance Plaza in the Pangyo Techno Valley Finance Center, which will provide full financial services for small and medium-size businesses and start-ups.

It is the first combined corporate banking and investment center, which is a new platform that offers not only traditional banking services but also merger and acquisition (M&A)-related financial support for companies.

Shinhan Bank and Shinhan Investment Corporation worked together on the branch.

By assigning corporate investment analysts to the center, the group expects to help boost companies’ M&As and aggressive investments.

Shinhan established a corporate investment banking (CIB) division in 2012 and has been providing services for large businesses. There have been growing needs for the CIB division to be expanded for smaller businesses.

“Transactions among small businesses in the capital market are forecast to increase due to recent changes in the financial environment such as the continuing low interest rates and the government’s plan to foster start-ups,” a group spokesman said.

The bank and securities firm said on the same day that they opened the first combined financial center for one-stop services from banking to securities investment. Branches opened at the headquarters building of Woori Bank in central Seoul, at Samsung’s in Seocho, southern Seoul and at the Posco Financial Center in Gwangyang, South Jeolla.

The combined branches will allow customers to handle banking and securities affairs in one place. The bank and securities firm will also provide financial consultations.

“Through smooth collaboration between the top bank and securities company, customers will be able to get high-quality, one-stop services,” said Yoon Yong-am, chief executive officer of Samsung Securities.