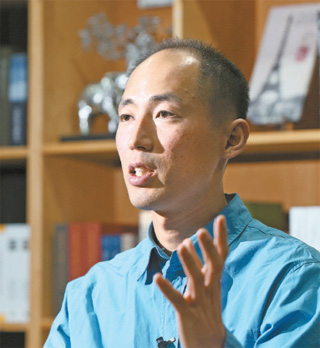 Earlier this year, a television commercial for an online part-time job recruiting site led to a dispute over minimum wage between part-time workers and their employers.

“The minimum wage set by the Korean government is 5,580 won [$5.21] per hour,” Hyeri, a member of the popular K-pop ensemble Girl’s Day, says in the commercial.

“It has been raised only minimally since last year - just 370 won, if employers even gave that,” she continues, in a line intended to highlight the unfair treatment part-time workers are forced to endure across the work force.

According to a survey in May 2014 by the Presidential Committee on the Young Generation, out of the 500 respondents in their 20s and 30s who once had a part-time job, 39.2 percent said that they received pay that was less than the minimum wage.

Gu Gyo-hyeon, 37, the president of the Arbeit Workers Union, established the organization for part-time workers in 2013. Since he was 23 years old, he has worked in numerous part-time positions: at a fast food joint, a construction site, a hotel and a restaurant.

He said he decided to found the union - arbeit is the German word for work or labor - after experiencing unfair treatment in the workplace.

Gu sat down for an interview with the Joongang Ilbo on April 9, just a few months ahead of the deadline to determine next year’s minimum wage, which is scheduled for the end of June. The following is an edited excerpt:

Q. How many part-time workers are currently employed?

A. According to research by Statistics Korea, the number of workers working under 32 hours per week is about 2 million. About 1.1 million of them are working in restaurants and other lodgings. Adding part-time workers not included in that count, it is estimated that there are about 3 million part-time workers.

Is a part-time position a standard type of job?

Absolutely. In the past, having a part-time job was a sort of a side line used to earn extra money. But now, with the job market in the country in limbo, the number of people who make a living through these types of jobs is increasing. Among our union members, most now are in their 40s and 50s. The arbeit has already become a standard job, so it should be seen as a typical job and new working conditions must be set for it.

What is the background for this evolution?

As the industry structure has escalated, the service sector has grown remarkably. Previously, we had to go to a fast food restaurant to eat a hamburger. But now can we get one delivered at home. Many new jobs have been generated as more services for customer convenience have been developed. But it is wrong to treat them with low wages due to being part-time jobs.

Why did you establish the Arbeit Workers Union?

I had many part-time jobs for 10 years. At times, when I was working for a civic group, I had to find other sources of income. But as an arbeit worker, I often experienced unfair treatment. I didn’t even know to sign a contract. I worked without knowing how much I would receive, how long I had to work, what kind of work I had to do, when my off days were. Once my employers put out the order, I just followed suit; once they gave me a wage, I just took it. I didn’t have a reason to ask why I was being treated the way I was. Afterward, I realized it was important to promote and establish rights for part-time workers. So I decided to establish a union.

The union calls for raising the minimum wage to 10,000 won per hour. Why?

According to Korea Statistics, a single worker under 34 can make both ends meet with 8,000 won hour. For a single person under 29, it is more than 10,000 won per hour. Looking at other countries, the average minimum wage among nations in the Organization for Economic Cooperation and Development is also around 10,000 won. Considering Korea’s economic status, we consider raising the minimum wage to 10,000 won to be appropriate.

That’s a 100 percent increase. Do you think that’s possible?

Even though the minimum wage is one of the most influential issues in the Korean economy and society, it is handled by a committee under the Ministry of Employment and Labor. A new approach to the issue is required, and it should include a philosophy and vision showing a direction that our society has to take.

Long-hour labor is a very serious problem in Korea. Part-time workers, in particular, must work for a long hours for low wages. University students, for example, find it difficult to maintain their GPAs because they spend so much time doing part-time work. There is even research indicating that countries in which people work too long or too much have low voter turnout. Even democracy needs time.

Teenagers and young people with part-time jobs deserve to have time to prepare for their futures. But they can’t afford it on such low wages. Their wages should be raised to the point where working hours can be reduced.

But even if the minimum wage is raised, income would remain the same with working hours reduced.

There is a big difference in quality of life. Previously, you could earn 50,000 won by working 10 hours. Now you get the same amount for five hours, then you can use the other five hours to do other things. That’s the way to improve the standard of living.

In regard to small-business owners and independent businessmen, the Federation of Professional Economic-Person Societies, an umbrella group representing some 250 smaller trade groups for the self-employed, opposes an increase in the minimum wage. What do you think about that?

The situation independent businessmen are facing is very serious because competition is getting tougher. But fixing the minimum wage is not a solution. If you talk with those people, many of them will tell you they opened the business not because they wanted it, but because they could not get a job. That means that if they had a job that was stable, they wouldn’t have to run their businesses. Creating a number of stable jobs in which they can make a living is the solution for independent businessmen. And that’s the reason why the government must raise the minimum wage.

There seems to be a misunderstanding here. The Satori Generation emerged in a different environment. In Japan, part-time workers at a convenient store earn 10,000 won per hour, and many laws are in place governing their rights. It is not possible to live on just 5,580 won.

Some companies have the wrong idea about part-time work.

Yes. Most big companies in Korea have franchises - fast food, convenience stores, cafes and multiplexes. And most of the workers serving customers are part-time and low-wage. The brand is represented via those workers, not via the CEO of the company. It is absolutely true that offering good working conditions for workers will help companies successfully run their businesses. If companies focus only on controlling labor costs, their businesses will fail.

Why did the union hold a protest targeting McDonald’s?

McDonald’s leads the franchise business. Not just fast food businesses, but all business franchises in Korea follow the McDonald’s system. Our goal is to change the business system after prompting change, first with McDonald’s. McDonald’s, Burger King, Lotteria and KFC own over 2,000 stores across the country. About 100,000 people work in those stores.

And McDonald’s prioritizes speed and efficiency. A hamburger has to come in 25 seconds after an order is received. It’s not about the product, or whether it is good and healthy or not. McDonald’s pursues excessive efficiency by controlling labor costs. It is frustrating that the only thing young workers learn there is to be fast and efficient. For 30 years, McDonald’s has benefited in Korea from low wages. It is time to show that it has a responsibility to our society.

What is your plan?

In the United States, the minimum wage issue gained attention after fast food industry workers campaigned for a $15 minimum wage. The union aims to raise Korea’s minimum wage to 10,000 won per hour for part-time workers. It is not impossible if we can get more support.