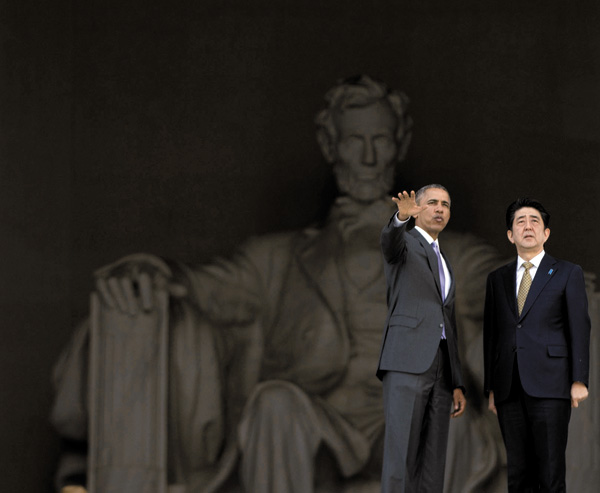 The Korean government urged continued consultation and transparency from the United States and Japan in regards to new bilateral defense cooperation guidelines signed Monday amid concerns of rising militarism in Japan.

This new U.S.-Japan defense cooperation pact enables Japan’s Self-Defense Forces to cooperate with Washington “to respond to an armed attack against the United States or a third country,” which includes Korea.

Japan’s exercising of collective self-defense, or the right to wage war outside its borders, was forbidden under its postwar pacifist constitution written by the United States.

A key concern is whether Japan will be able to bring its armed forces to the Korean Peninsula without prior consent of the South Korean government.

Korean Foreign Ministry spokesman Noh Gwang-il on Tuesday noted that the newly revised guidelines ensure the “complete sovereignty of the third country in the case of Japan exercising collective self-defense.” Seoul officials have emphasized that Tokyo has said it will ask consent of the Korean government before it brings any forces to the Korean Peninsula.

Noh went on to commend the United States and Japan’s “efforts towards prior consultations and transparency” before the guidelines were announced in New York after U.S.-Japan security talks on Monday.

The guidelines were revised for the first time in 18 years and will enable the Japanese Self-Defense Forces to take a larger role in global security. They also covered areas including defense against ballistic missiles, space cooperation and bolstering maritime security.

They come after the Abe cabinet last July announced an unconventional reinterpretation of its U.S.-penned pacifist constitution that banned its right to wage war. The Abe administration is now moving to legalize its right to collective self-defense.

Defense Secretary Carter said, “These guidelines allow us to modernize the U.S.-Japan alliance” and “open new areas of military cooperation both in the Asia-Pacific and around the globe.”

Nonetheless, Korea remains anxious about Japan’s move toward boosting its military capabilities as the current administration continues to make remarks and take actions that seem to deny or even glorify its imperialistic past. This includes Japanese leaders and politicians visiting the controversial Yasukuni Shrine, which enshrines World War II criminals, and historical revisionist policies.

Furthermore, because the United States has operational control of military troops in South Korea, there is also unease about whether the guidelines may provide room for Japan to bring its forces to Korea’s area of operation solely under Washington’s orders.

A senior Korean defense official said Tuesday that Seoul has conveyed such concerns to Tokyo and that Japanese officials confirmed: “When entering a third country’s territory, it will always receive the prior request and consent of that country.”

The official added that the U.S.-Japan guidelines “have political significance” and will help the Abe administration move to legalize collective self-defense in its security laws “and that we will be observing closely the process.”

The update of the U.S-Japan defense guidelines from 1997 touches on various scenarios including Tokyo’s response to a latent threat against Japan’s peace and security or an armed attack on the country, and how it can come to the assistance in the case of an attack on nations other than Japan.

The revision comes as China moves to modernize and build up its military, and positions the United States by Japan in the territorial dispute with Beijing over the Senkaku, or Diaoyu, Islands in the East China Sea.

Under the revised guidelines, the Senkaku Islands are reaffirmed as territories of Japan that fall under the U.S.-Japan Treaty of Mutual Cooperation and Security. The U.S. and Japan oppose any unilateral action interfering with Japan’s administration of the islands.

Skeptics are especially worried that if Korea and Japan fought over Korea’s easternmost Dokdo Island, which Tokyo calls Takeshima, Washington would have to support Japan under the new guidelines.

Yamaguchi Noboru, professor at the International University of Japan Research Institute and retired lieutenant general of the Japan Ground Self-Defense Force, said that the guidelines make clear there are certain conditions that apply to joint U.S.-Japan efforts in regard to Senkaku that do not apply to other islands.

On collective self-defense, Noboru told reporters at a forum hosted by the Asan Institute for Policy Studies in Seoul that under the new guidelines, in a situation “where Japan is not attacked and another country that is closely related to Japan is under attack, Japan may react.

“If the U.S. asked Japan to help in such a case, we may be able to do so. We were not able to do so beforehand.” He said that under the United Nations Charter, “Collective defense is only allowed in the case when the third party, when the party under attack, asks for help.”