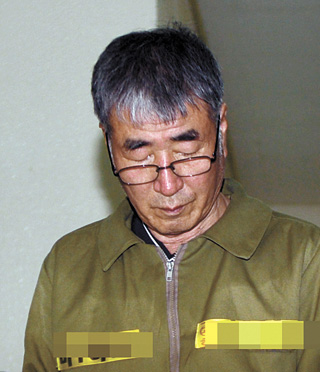 The captain of the Sewol ferry, who fled the capsizing ship before more than 300 of its passengers drowned, was convicted of murder by an appellate court Tuesday and was sentenced to life in prison.

The Gwangju High Court Tuesday quashed the original ruling, which convicted Captain Lee Jun-seok of involuntary manslaughter and sentenced him to 36 years in prison. The appeals court said he was guilty of murder and handed down a life sentence.

“Lee let [crew members and passengers] die in terrible pain because he neglected his duty as a captain in the so-called golden time [the best opportunity to save passengers in an accident] and entirely abandoned them and escaped with his crew,” the chief judge said in a trembling voice.

A panel of three judges ruled that “Lee was the only person who was legally and actually able to decide to rescue passengers.”

“The defendant Lee’s irresponsible action has deeply wounded students who died in their teenage years, their parents who suffer in anger and desperation, relatives of those who are still missing and survivors who are suffering from guilt and depression,” the chief judge continued with tears in his eyes.

“It is inevitable to give a heavy penalty to prevent a similar accident from happening, so we decided to give a life sentence to Lee in order to isolate him from the society permanently.”

Of the 476 passengers and crew on the Sewol, 172 were rescued in the first few hours of the tragedy, 295 were killed and nine are still missing. Of the dead and missing, 250 were students from Danwon High School in Ansan, Gyeonggi, and 11 were teachers from the same school on a school trip to Jeju Island.

The punishments for the 14 other crew members who escaped the Sewol were made lighter as the judges said the crew had to follow Captain Lee’s orders. They received prison terms ranging from 18 months to 12 years. The prosecution indicted four of them for murder, but the panel acquitted all four on that charge.

Chief Engineer Park Gi-ho, who was convicted of murder in the original trial after leaving an injured crew member behind, was given a prison term of 10 years for involuntary manslaughter by neglecting his duty, down from 30 years in the original ruling. Chief Mate Kang Won-sik was sentenced to 12 years on Tuesday, down from 20 years.

Relatives of the victims who attended the trial on Tuesday held a press conference at the entrance of the high court in Gwangju and expressed discontent with the decision.

“We have demanded the truth about the accident and solemn punishment for those who were responsible, but today’s ruling has deeply disappointed the families,” said a member of the 4/16 Sewol Families for Truth and a Safer Society, an organization of family members of Sewol victims.

“Those who were obliged to protect the lives of others neglected their duties and sacrificed hundreds of people,” the spokesman continued. “We will definitely take this case to the Supreme Court.”