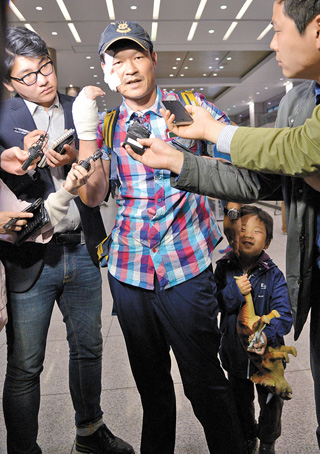 Park Jong-kwon, one of three Koreans injured in a fatal earthquake that killed more than 4,000 people in Nepal, talks to reporters as he arrives at Incheon International Airport. [NEWSIS]

After the deadly earthquake that hit Nepal on Saturday, Incheon International Airport welcomed its first plane back from the stricken country early Tuesday.

Korean Air KE696 carried a total of 236 passengers from Kathmandu, including 104 Koreans.

It was supposed to land at 11:20 p.m. on Monday, but was delayed about two hours due to chaotic conditions at Tribhuvan International Airport in the Nepali capital.

“The ground constantly shook like an amusement park ride,” said passenger Yeon Eung-ho, 41, remembering the magnitude-7.8 quake on Saturday morning. “We saw numbers of dead bodies covered by white sheets as we moved from Pokhara to Kathmandu.”

Yeon said he traveled to Nepal on April 17 to go trekking in the Himalayas and was staying at a lodge in Jhinu Danda, which is 2,000 meters (6,561 feet) above sea level and northwest of Pokhara, when the quake hit.

“As we left the lodge after having lunch, the house and ground began to quake and about 15 people inside the lodge ran out of the building screaming,” Yeon added.

“We arrived in Kathmandu on Sunday and stayed at a hotel but it was completely blacked out because the electricity and water were off,” Kwon Oh-guk, 31, one of Yeon’s companions, explained.

“Foreigners carried headlamps all the time and the guests kept evacuating the hotel every time an aftershock came.”

The earthquake injured three Koreans staying in Nepal and one of them was Park Jong-gwon, 39, who was also on the plane. He was wearing a bandage on his right hand and right side of his face.

“You could see the ground caving in and the tremors kept going for about 20 minutes,” Park said. “I crouched in the corner of an office because I constantly heard rocks rolling down.”

The situation was much more serious in Kathmandu.

“Brick buildings collapsed in the blink of an eye,” said traveler Lee Jin-hee, 23, who was in the capital at the time of the quake. “I also fell down in front of a stranger as a nearby hotel collapsed.”

The returnees said the medical system is close to collapse with injured people surging into hospitals.

“At first, doctors would treat minor injuries at local hospitals, but now it is difficult to provide even basic treatment as the number of patients is mushrooming,” said Kim Jeong-sik, 67, a traditional medicine doctor who visits Nepal for medical voluntary work from time to time.

“People are living on roads and staying outdoors at night, even in the rain.”

The official death toll has risen to over 4,000 and about 8,000 people are injured, according to local authorities. The UN Resident Coordinator’s Office in Nepal said about 8 million people in 39 districts have been affected by the earthquake, which is nearly a third of the country’s entire population. Some 2 million of them live in 11 severely affected districts.