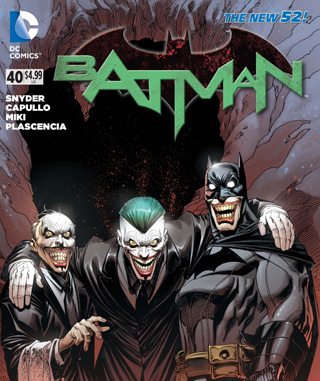 Move over, Bruce Wayne: There’s going to be a new Batman fighting crime in Gotham City for DC Comics, and instead of a cape, he’ll wear a manga-style suit of armor.

The creators of Batman are dethroning Wayne and bringing in a new Dark Knight as DC Comics begins to gear up for the annual Free Comic Book Day giveaways.

Author Scott Snyder and artist Greg Capullo won’t say who will be under the armored cowl in Batman #41 - the cape is also retired along with Bruce Wayne - but say this is one of those stories that “changes all the pieces on the table.’’

“The character we’re putting under the cowl never expected it, never saw it coming and never set out to be Batman,’’ Snyder said. “It comes out of left field, and he realizes that he’s the only one that can make it make sense.’’

Wayne ends his run as Batman following a climactic battle with his archenemy the Joker in the appropriately named storyline “Endgame,’’ but it doesn’t mean he’s gone for good, said Snyder.

He has relinquished his role as Batman at least twice before.

“He might not be under the cowl when the story starts, but his presence will be a big part of the story and shape it,’’ Snyder said.

Batman is one of the most enduring comic book superheroes, star of a long-running comic book, television series and movies - with the “Superman v Batman: Dawn of Justice’’ movie scheduled for next year.

Any kind of change to the character’s mythos can be risky. But Snyder and Capullo - who designed the new armor - say their intention is to inject new interest into the Dark Knight comic books by putting a new person into the role.

“It gives us a chance to see Batman from this incredibly different angle,’’ said Snyder, who has worked on the comic book with Capullo for four years.

The change in Batman is one of many going on in comic books recently, with Marvel re-casting a version of Spider-Man as a multi-racial teenager and Thor as a woman, and DC Comics reimaging icons like Superman and Wonder Woman during a company-wide reboot. This all comes as comic book superheroes are the focus of Hollywood blockbuster movies like “The Avengers: Age of Ultron,’’ opening this week, or TV’s “Gotham,’’ which tells the story of a young Bruce Wayne.

The new Batman wears a manga-inspired suit of armor, Capullo said, in addition to another uniform underneath that’s used when armor may be too bulky.

Comic book companies are pulling out all the stops for “Free Comic Book Day’’ on Saturday, when comic book stores offer some free comic books to readers in hopes of bringing in new fans to the industry. Marvel Comics, the home of the Avengers, the X-Men and Spider-Man, will be offering free comics in both English and Spanish on that day.

The change in Batman hopefully will bring in new people to the book, Snyder said. “This gives us a new lease on the book, and it gives hopefully fans a sense of how fun Batman can be,’’ Snyder said.