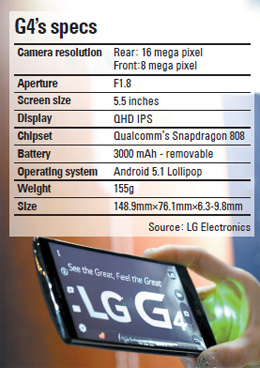 With the G4 joining the competition against the high-end top dogs - Apple’s iPhone 6 and iPhone 6 Plus and Samsung Electronics’ Galaxy S6 and Galaxy S6 Edge - there are questions whether the new device will do as well as its G3 predecessor.

Launch events took place in Seoul and major cities across the globe including London and New York.

As the primary improvement is the camera, the sales performance of G4 will indicate how much importance people attach to the photo functions on their smartphones.

LG Electronics believes that its approach will work, predicting a total of 12 million units of the G4 will sell at home and abroad.

“Given that about 10 million G3s have sold so far, we expect the G4 to sell more with improved features,” said Cho Seong-ha, vice president of LG Electronics.

The company said that it took into account various market conditions.

“Our primary focus was to build a new consumer base with the launch of the G4,” Cho said, expressing expectations that more affordable G4 will widen its customer base.

“We considered the current market conditions including the subsidy regulation,” he said, referring to the Mobile Device Distribution Improvement Act that capped the amount of subsidies Korean carriers can offer customers on new phones. The regulation is blamed for increasing smartphone prices.

A large part of the presentation was devoted to the revamped camera feature, which LG claims will deliver “an entirely new experience.”

Unlike the Galaxy S6’s 1.9 aperture, the G4 has a 1.8 aperture lens, the first among smartphones, although it remains unclear how popular the feature will be. In principle, a lower aperture lens lets more light in.

The company also boosted the resolution of the device’s two cameras. The rear-facing camera has 16 megapixels and front-facing one 8 megapixels.

Changes to the user interface and button use were also made.

The G4 comes with a Quick Shot button, which allows users to directly open the camera app by pressing the phone’s reduce-volume button twice. Users can automatically group photos together in a single album based on the photos’ locations powered by GPS technology.

Another drastic shift came with the cover. Interchangeable covers - either leather or ceramic - are available. The company said the approach is meant to challenge the boring metal covers used by other phone makers.

“We offer various options because we hope to reflect the different tastes of our consumers,” said the vice president.

On the same day of the launch, the country’s second-largest electronics company announced a first-quarter earnings report that showed extended losses in its TV division but an improvement in the handset business.

The company said that operating profit during the January-March period was 305.2 billion won, down 36 percent compared with the same period last year.

LG Electronics cited global currency moves as a cause of negative earnings as the strengthened dollar made the company’s products more expensive.

LG said this quarter was the best Q1 record since 2010, boosted by strong sales of the G3 especially in the North American region.

The company expected further gains in the second quarter following the launch of the G4.

To strengthen sales in the mobile division, the company said, a variant model of the G4 will be released in the second quarter.

The company painted a positive outlook for the TV division in the second quarter.

“We hope to boost TV margins by launching premium products in the second quarter,” the company said in a statement.

The company posted 382.6 billion won in sales of vehicle components, a new business sector that the company hopes will develop into a new growth engine.

But the division had a 2.4 billion won loss due to heavy amounts of investment.