Paul McCartney to debut on Saturday

Paul McCartney to debut on Saturday 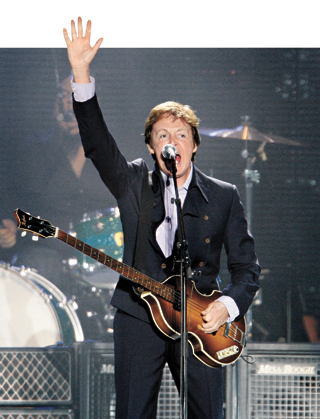 Paul McCartney will stage his first performance in Korea at 8 p.m. on Saturday at Jamsil Sports Complex in southern Seoul.

The 72-year-old former Beatle kicked off his “Out There” tour in May 2013. Korea is his next destination following concerts in Japan earlier last week.

McCartney has performed about 30 songs on average during his three-hour concerts this tour.

He sang 39 songs when he performed in Japan, including “Magical Mystery Tour,” “Can’t Buy Me Love” and “Let Me Roll It.”

More than half of the songs McCartney sang in Japan were from his days in the Beatles - “Let It Be,” “Hey Jude” and “Yesterday.”

His set here may differ slightly though his lineup has stayed relatively consistent throughout. The former Beatle is expected to sing a number of his old hits in Korea.

McCartney’s “Out There” tour will wrap in July 2015. His itinerary after Seoul includes shows in London, Paris and Stockholm, among others.

The iconic musician was set to perform in Korea last year but was forced to postpone due to health issues.