Finding global recognition, one cable at a time

Finding global recognition, one cable at a time 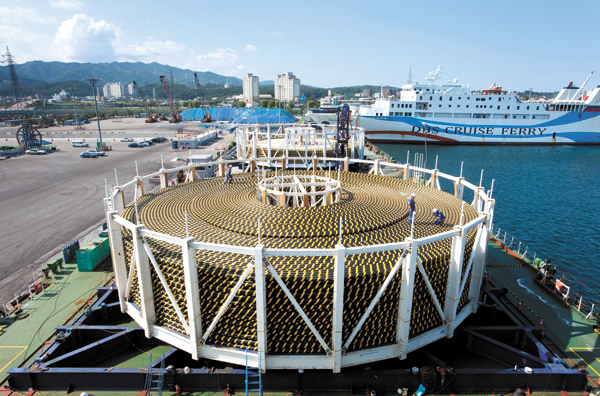 LS Cable & System workers load submarine cable to be shipped to Qatar. Provided by the company

In March, a ship set off from Donghae, Gangwon, with 100 kilometers (62 miles) of submarine cable on board. The destination was Qatar, where the cables will connect Ras Laffan, an industrial city, with Halul Island, a processing site for oil.

The company’s focus on submarine cables began in 2009. They quickly reached success, signing a contract worth $400 million with Qatar Petroleum in 2012 - the largest ever to be inked by a Korean cable company.

European corporations used to dominate the global cable market. In fact, all industrial cables in Korea were imported until LS Cable & System began its focus in 2009. But these days, LS Cable & System develops cables for domestic use and supplies many foreign companies.

Superconduction has become another core business for the corporation. Although it was relatively late to invest in the technology, the company was soon recognized for its expertise. It successfully developed alternating current products just three years after starting research and development, and in 2013, the company became the first in the world to develop direct current products.

LS Cable & System makes continuous efforts to provide better service. Competitors in the Middle East, China and India can also provide cables expediently and at low prices, but LS Cable & System is turning those threats into new business opportunities by cooperating with foreign companies. Partnership and cooperation with Indian, Vietnamese and Chinese companies have been fruitful so far.

The company is also entering new markets. European companies have become new partners recently, including companies in Italy, France, Denmark and the Netherlands. Zambia is another new market, the entrance into which is expected to raise demands in other African countries as well.

Over the course of ten years, LS Cable & System gained recognition in various fields of business. Although new competition is increasingly visible, the company expects to continue to consistently grow, achieving ever higher levels of success.