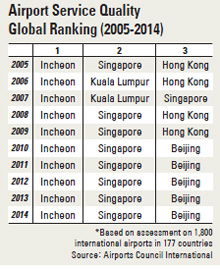 ON THE DEAD SEA, Jordan - Incheon International Airport has been recognized as the No. 1 large airport in the world for a record 10th consecutive year at the Airport Service Quality awards ceremony sponsored by Airports Council International (ACI).

Incheon also was named best airport overall in the Asia-Pacific region at the event held Tuesday, local time, at the Jordan Valley Marriott Resort & Spa on the Dead Sea.

ACI determines rankings by surveying a 550,000 passengers a year about its 1,800 member airports in 177 countries. They are asked questions in 34 service categories, including convenience of check-in, security facilities, friendliness of staff and efficiency of airport management. 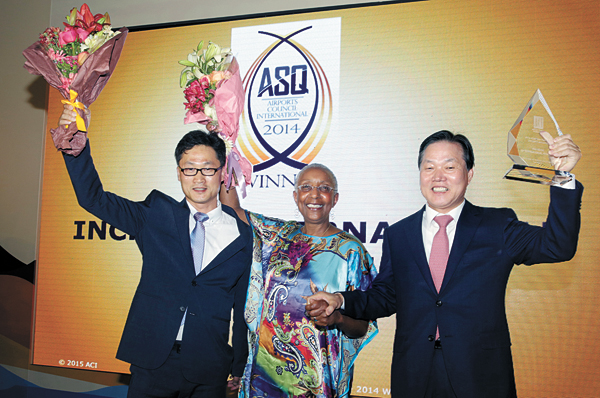 Incheon airport is the only airport to be ranked No. 1 for 10 straight years, far ahead or runner-up Dubai International Airport, which held the top spot for three straight years from 2001.

The airport’s average entrance and departure procedures are each estimated to take 11 minutes and 19 minutes, nearly three times faster than the ACI’s recommendation. Incheon reports only one missing bag in 100,000, a rate far better that European and U.S. airports.

As for shopping, the airport has had the highest annual duty-free sales in the world since 2011.

The number of passengers using Incheon has grown an average of 6.7 percent every year ever since it opened in 2001. The airport started with 47 carriers serving 109 cities; last year, there were 88 airlines flying to 184 destinations.

“In the past, airports were considered just transportation facilities,” said Park Wan-su, CEO of Incheon International Airport after the ceremony. “But ever since Incheon first started implementing cultural and service facilities inside the airport, it has become a worldwide trend.”

Park cited saturated terminals as one of his largest concerns. As of last year, nearly 45 million passengers used the airport, making it difficult to maintain the fast service for which Incheon has been known.

Another threat is airports in China and Japan that have been adding routes and expanding facilities.

Incheon’s second terminal is 27 percent complete and is scheduled to be finished at the end of 2017. Once opened, the new terminal is expected to handle 18 million additional passengers per year.

When it comes to tourism infrastructure such as casinos, hotels and resort complexes, Changyi airport has pushed an aggressive policy to make the surrounding area a tourist and shopping destination by 2017.

Changyi International Airport was designated as a tourism specialty area in 2013, with cultural and commercial facilities connected to the airport’s two terminals. The Singapore government also has scheduled construction of its fourth and fifth terminals.

“Incheon airport is also pushing to develop a resort complex, but the process is taking too long,” said Kim Je-chul, head of the aviation policy and technology division at Korea Transport Institute. “Support from the central government is a must to expedite the process.”

The airport recently reached a memorandum of understanding with U.S. casino company Mohegan Sun to build a gambling and entertainment resort on land northwest of the airport. The goal is to complete construction by 2020.