NPAD crushed in all 4 by-elections

NPAD crushed in all 4 by-elections

The ruling party won surprise victories in three out of four National Assembly by-elections Wednesday despite a snowballing scandal engulfing President Park Geun-hye’s inner circle, while the main opposition party suffered a crushing defeat across the board after struggling with independent liberal rivals.

Four vacancies in the legislature were filled through the by-elections including three districts previously controlled by the now-disbanded leftist Unified Progressive Party: Gwanak B in Seoul, Jungwon in Seongnam, Gyeonggi, and Seo B in Gwangju. The fourth seat — Ganghwa B in Incheon’s Seo District — was formerly controlled by the ruling Saenuri Party.

The ruling party added three more seats to its 157 majority in the 300-seat National Assembly.

And in the fourth district in Gwangju, Chun Jung-bae, a former veteran lawmaker of the main opposition New Politics Alliance for Democracy (NPAD), won the race. He ran as an independent. 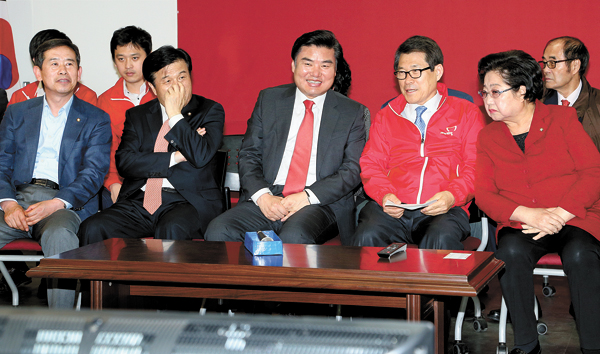 Leaders of the ruling Saenuri Party look sanguine about the by-elections as they watch televised vote counts at the party’s headquarters in Yeouido, Seoul. By Choi Seung-shik

Since three of the four constituencies were traditional liberal turfs, initial expectations were that the NPAD would score easy victories. But the main opposition party failed to keep unity in the liberal camp and its candidates ended up running against other liberal rivals running as independents.

The failure was particularly serious in Seoul’s Gwanak B constituency and Gwangju’s Seo B. In Gwanak B, six candidates ran: the Saenuri’s Oh Shin-hwa, the NPAD’s Jeong Tae-ho and also Chung Dong-young, who left the main opposition party earlier this year to establish his own political group. Two of the other three trailing candidates were conservative and one was liberal.

Chung is a major political player who ran in the 2007 presidential election as the opposition candidate but suffered a crushing defeat against Lee Myung-bak.

As the liberal votes were split between Jeong and Chung, the Saenuri’s Oh won the race in Gwanak B.

Cho Young-teck, the NPAD candidate in Gwangju’s Seo B district, faced even a tougher liberal rival - Chun, a former justice minister and four-time lawmaker. Chun left the NPAD last month to run as an independent, refusing to compete in the internal primary of the NPAD. Although Gwangju is a traditional stronghold of the NPAD, liberal votes were split between Cho and Chun.

The Saenuri Party’s Shin Sang-jin, a doctor-turned-lawmaker, won a victory for the ruling party in Jungwon in Seongnam, Gyeonggi, against his NPAD rival Chung Hwan-suk.

The political stakes were significant even though only four lawmakers were to be elected and they will serve only until May 29, 2016.

It was the first test of strategy and will between Chairman Kim Moo-sung of the ruling Saenuri Party and Chairman Moon Jae-in of the main opposition NPAD. The two men are seen as the most prominent presidential hopefuls for the 2017 election.

And it was a particular test for Park, who has earned the nickname “queen of elections.” Three by-elections have taken place since Park became president in February 2013 for 20 National Assembly seats. Her ruling party won 15 of them.

In July 2014 by-elections, the stakes were particularly high as 15 vacancies were filled. Of them, the Saenuri won 11 while the NPAD won just four.

The ruling party was apparently unhurt by the massive corruption scandal involving late construction tycoon Sung Wan-jong, who claimed before his suicide to have paid off politicians for years, including those in President Park’s inner circle.

On Tuesday, the eve of the by-elections, Park issued a statement about the scandal that forced her own prime minister to quit — without mentioning the payoffs alleged to have been given to her key associates and to two of her presidential campaigns.

Instead, she took direct aim at the NPAD by promising an investigation into special pardons given during the Roh Moo-hyun presidency to Sung, the businessman who made the payoffs. NPAD Chairman Moon was the right-hand man of the late former president.

Moon said Wednesday morning he was disappointed that Park had issued the message on the eve of the by-elections. “It is frustrating to see the president, trying to conceal the true nature of the scandal and directly fueling a political fight for the sake of an election victory,” Moon said. “The voters must make a verdict on Park’s failures with votes.”

Another NPAD leader, Jung Chung-rae, said Roh had faced impeachment in 2004 for wishing his party a good performance in an election. “Let’s compare what Park said and what Roh said,” Jung said. “Which one of the two violated the duty of political neutrality more seriously?”

The Blue House said the president’s message should not be twisted. “The president was merely stating her position on the issues that the people are curious about,” said Min Kyung-wook, Park’s spokesman. “It’s nothing more, nothing less.”

According to the National Election Commission, the average turnout for the four districts was 36 percent. The turnout for Gwanak B in Seoul was 36.9 percent; Jungwon in Seongnam, Gyeonggi, 31.5 percent; Seo B in Gwangju 41.1 percent; and Ganghwa B in Incheon’s Seo District 36.6 percent.