Park’s quandary over an old friend

Park’s quandary over an old friend

Two mug shots of Hwang Tae-song in his 20s during Japanese colonial rule, which were taken after he was arrested for violating the act on public order. The photo on the left was taken in 1928, when he was 22, and the one of the right in 1934, at the age of 28. Provided by National Institute of Korean History

I had briefed him on Hwang Tae-song, the mysterious visitor from North Korea who had suddenly appeared in the South in October 1961 demanding a meeting with either me, the head of the Korean Central Intelligence Agency, or Park, the military leader of the country.

There were other reasons Hwang wanted a meeting with Park. He knew him from boyhood. Park called Hwang “big brother” during his childhood. 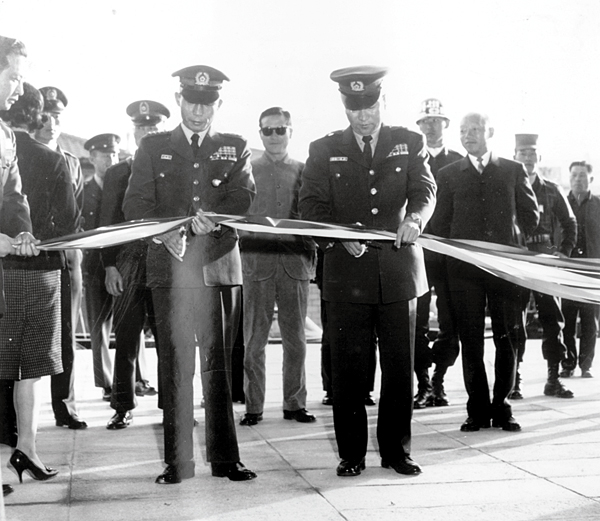 Park Chung Hee, front left, attends a tape-cutting ceremony for an unspecified event in September 1961 as chairman of the Supreme Council for National Reconstruction. Kim Jong-pil is behind him in sunglasses. [JoongAng Photo]

After keeping silent for some time, Park asked, “So, what are you planning to do with him?”

I answered without hesitation. “We need to investigate him in-depth and get rid of him as soon as possible. If we let him loose, he will be a lingering headache for us.”

I also promised Park: “We will take all necessary legal procedures. It may take some time but you don’t have to worry. I will take care of it.”

He smiled briefly but didn’t say a word. He seemed emotionally conflicted about what was going on.

To him, Hwang was a close friend of his older brother and a man he was deeply fond of as a young boy. It was perfectly logical that Hwang’s mysterious appearance presented a dilemma to him.

That was all he said.

To talk about Hwang, I need to relate the story of Park Sang-hee, Park’s older brother, who died in 1946 at age 40. He was also my father-in-law. He was an educated man who headed the Gumi bureau in North Gyeongsang for the daily Dong-A Ilbo. He was a man filled with anger over the status of his country under Japanese colonial rule. My father-in-law was jailed a number of times for plotting demonstrations against colonial rule. At the time, the sentiment was that people who resisted the Japanese and fought for independence were leftists. A far as I know, my father in law was a nationalist with liberal ideas but not a Communist.

My father-in-law raised my wife, Myung-ok, with deep affection. He would stand on a train platform waiting for his daughter to get off from her commute from high school - making sure that no boy would dare ask her on a date.

In October 1946, he was fatally gunned down during a demonstration against the U.S. military-led government as he was trying to mediate the conflict as an arbitrator.

My mother-in-law, Jo Gui-bun, was a modern, educated woman who wore high heels in her 20s and 30s. She was involved in the women’s rights movement and fell in love with a man who was renowned for his intellect.

My mother-in-law looked after Park Chung Hee many times. When he was about to leave for Manchuria to enlist in the Manchukuo Imperial Army (the armed forces of the Japanese puppet state of Manchukuo, or Manchuria), it was Gui-bun who gave him money. She got that money by selling a gold wristwatch of her husband’s without telling him.

After discovering his watch was missing, my father-in-law asked where it was. She told him she sold it to pay for Park Chung Hee’s expenses. She told me later that her husband understood his younger brother really needed that money to enlist.

Hwang Tae-song and my father-in-law were close friends in childhood. Hwang was said to have played a central role in staging rallies against the U.S. military government in Korea in 1946. Hwang fled to the North as the authorities were closing in to arrest him. He was an independence activist during Japan’s 36-year colonial rule. In the North, he at one point served as a deputy minister for trade.

During interrogation, Hwang insisted he was not a spy but a secret envoy sent by Kim Il Sung. It seemed certain that Hwang did indeed come to the South at the order of Kim Il Sung to seek some agreement with Park Chung Hee. By definition, I considered such a mission an attempt to absorb the South into the North under Communist rule.

Kim Il Sung must have discovered the head of the military junta in Seoul was the younger brother of Hwang’s close childhood friend, my father-in-law. Kim must have also known that I, the son-in-law of Hwang’s friend Sang-hee, was the head of the Korean Central Intelligence Agency. I assume Kim also knew that Park Chung Hee’s history of following socialist ideas almost landed him on death row in 1949.

Kim must have sent Hwang hoping he could gain something. If it didn’t lead to what Kim wanted, it would still be fine for him. It was not a zero-sum game for him to have sent a former trade vice minister to the South.

But Park could not meet Hwang. He was still facing suspicions of being a leftist from his past record. Even after the success of the May 16 revolution [the coup d’etat], some within the military persisted with a smear campaign that he was a Communist. The United States had suspicions about Park’s ideology too.

It was against this backdrop that I prioritized anti-Communism as the No. 1 promise to the nation by the revolutionary forces. Exposing Hwang’s relationship with Park Chung Hee and his older brother - already dead for 15 years - could jeopardize us all.

Park never admitted to anyone his fear of being branded a Communist, even to me. But I could still fathom a sense of anxiety.

Kim Il Sung misjudged Park’s character as well as mine and how we’d react.

I treated Hwang as a major spy caught in the South. He was nothing more than a spy to me. This was part of my strong determination as head of the intelligence agency that I would not let anyone get in our way of achieving our mission of modernizing Korea and that I would put my life on the line to support Park to achieve this goal.

From that perspective, Hwang was nothing but a liability. I decided to wrap up the matter as quickly as possible. Park did not say anything about Hwang after our meeting. But I think he was on the same page with me over the self-confessed secret envoy.

There was another reason for me to treat Hwang as nothing more than a spy. Pyongyang did not contact us through any channel when Hwang crossed the border. Neither I nor Park knew about Hwang’s return to the South for over a month after he made the actual crossing.