Seocho-dong apartment No. 1 in value for 10th year

Seocho-dong apartment No. 1 in value for 10th year 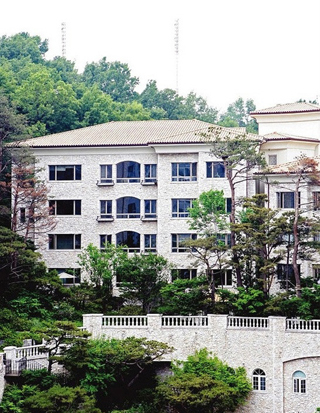 What’s the most expensive apartment on the peninsula by government-assessed value?

According to the Ministry of Land, Transport and Infrastructure, it’s Traum Haus 5 in Seocho-dong, Gangnam, southern Seoul.

The apartment is 273.6 square meters (2,945 square feet) and has remained the most expensive unit in the country since 2006. The apartment’s value rose 6 percent in 2015 compared with the previous year to 6.12 billion won ($5.7 million). Average year-on-year growth is 3.1 percent nationwide and 2.4 percent in Seoul.

A recent study by the Ministry of Land, Transport and Infrastructure showed the most expensive apartments in the country were concentrated in Gangnam.

The ministry on Thursday released the 2015 assessed value of 11.6 million apartments. However, these apartments could be worth a lot more since the government’s assessed value is roughly 70 percent of market value. 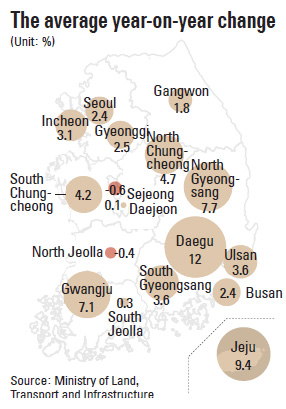 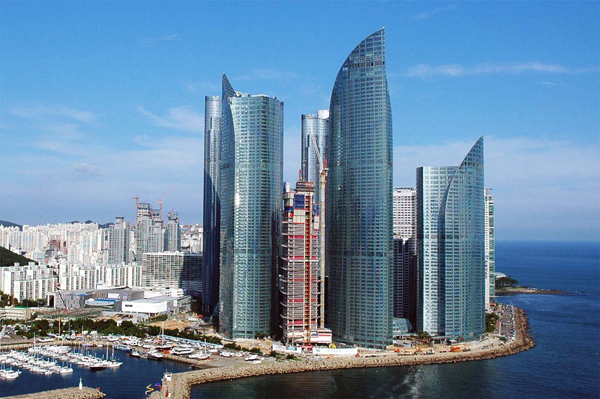 The Haeundae I’Park apartment on the beach in Busan is the fourth most expensive apartment in the country. [JoongAng Ilbo]

Of the 10 most expensive apartments, six are in Gangnam. One is at Haeundae I’Park in Busan and the remainder in other areas of Seoul.

The Busan I’Park apartment on the beach is 286 square meters and valued at 4.14 billion won. It is the fourth most expensive apartment in the country.

The other three apartments in the top 10 are north of the Han River. 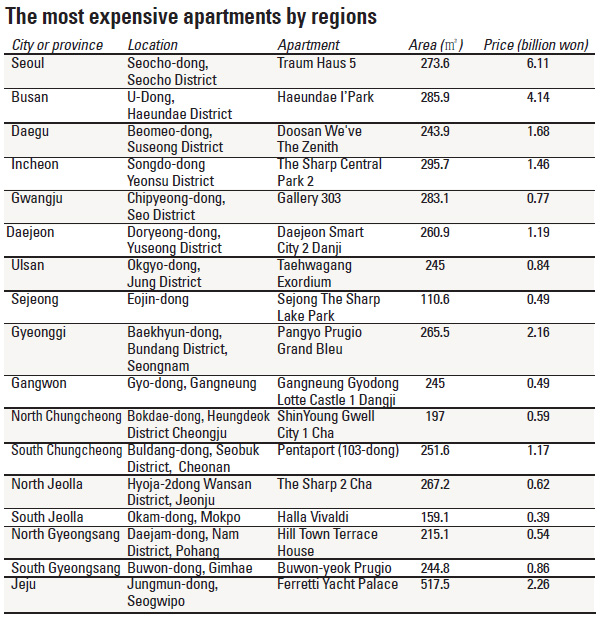 Hannam The Hill was in the top 10 for the first time. The 244.8-square-meter apartment ranked 11th last year and moved up to eighth this year as its value rose 20 percent to 3.7 billion won.

Thanks to the recovery of the property market backed by the government’s aggressive support, including deregulation and a record low benchmark interest rate of 1.75 percent, the assessed value of apartments nationwide rose an average of 3.1 percent, the strongest year-on-year growth since it rose 4.3 percent in 2012. 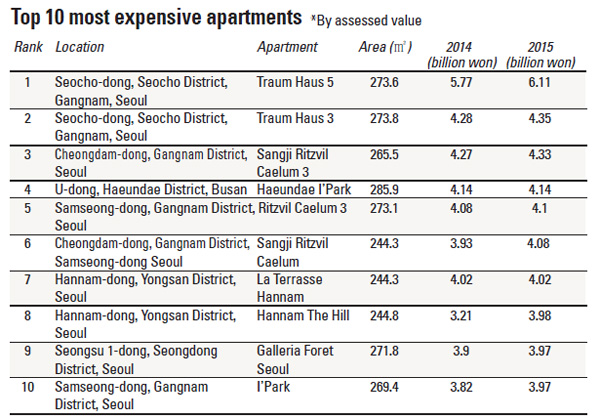 Furthermore, it is a significant improvement considering that last year apartment assessed value grew 0.4 percent on average compared with the previous year.

“The government launched several economic revitalization plans, including the real estate measure Sept. 1, and added to the lowered interest rate and the [burden from] rising jeonse [long-term deposit with minimum contract of two years], that has increased the number of people who want to buy their own apartment,” said a Land Ministry official.

By cities and provinces, Daegu saw the sharpest assessed value growth of 12 percent. The biggest reasons why apartment prices grew sharply in North Gyeongsang’s biggest city was the relocation of state-run institutions and opening of a third subway line. Suseong District, located in the heart of Daegu, saw average apartment values grow 17.1 percent.

In Jeju, where Chinese investors have been increasing their real estate purchases, the average assessed value of apartments grew 9.4 percent.

North Gyeongsang and Gwangju also enjoyed an increase of more than 7 percent. Other than Seoul and Busan, which saw the slowest growth at 2.4 percent, the area with the slowest increase in apartment value was Gangwon, which grew only 1.8 percent.

The report also showed that demand for small apartments continues to outweigh that for larger units. Apartments 85 square meters or less saw their value grow 4 percent, while the value of those larger than 85 square meters grew 2.8 percent.

The ministry cited changing social and economic environments, including the growing population of people aged 60 or more and rapid expansion of single-member and small family households.