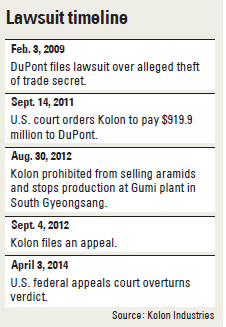 A six-year legal battle between Kolon Industries and DuPont, a U.S.-based chemical company, is over after Korea’s leading textile maker agreed to pay 295.4 billion won ($275 million) to settle lawsuits related to the theft trade secrets.

According to Kolon on Friday, the company will now be able to resume production and sales of aramid, a high-end heat-resistant and strong synthetic fiber that is used in products from bulletproof body armor to bicycle tires.

Under the agreement, DuPont will drop civil and criminal cases against Kolon.

In the criminal case, Kolon will pay 91.4 billion won to DuPont for plotting the trade secret theft.

Prosecutors in the United States said the case will be terminated under a plea agreement that requires Kolon to plead guilty.

Kolon will pay the fine in installments over the next five years.

In February 2009, the U.S. company filed a lawsuit against Kolon accusing the Korean company of stealing trade secrets about aramid by hiring a retired DuPont employee.

DuPont contended that a total of 149 trade secrets related to aramid were stolen by Kolon.

Kolon got into the aramid fiber business 10 years ago, entering a market that had been dominated by DuPont, which developed the first aramid fiber in 1973.

“We are pleased to announce that every dispute with DuPont has been ended,” said Park Dong-moon, CEO of Kolon Industries, in a statement. “With the agreement, the company is now able to expand its aramid business.”

DuPont told local media it was satisfied with the deal.

“The resolution of this litigation helps ensure the protection of our proprietary technology,” said Stacey Fox, senior vice president and general counsel for the Wilmington, Del., company.