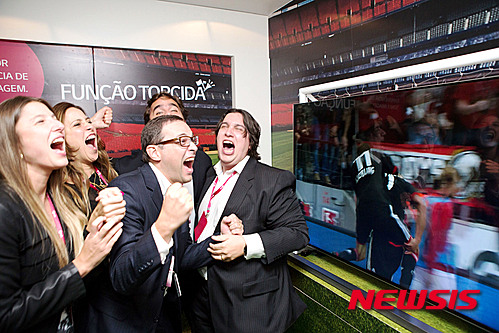 Fans enjoy a football match in Arena Mode on an LG television. Provided by the company

LG Electronics is looking to grab more customers in India, Latin America and Africa with a new line of televisions equipped with functions tailored just for them, the company said on Friday.

LG plans to unveil the Jazz III television in India in the second half of the year with an upgraded sounfd system.

The Jazz III has a 32-inche screen with 600 watt speakers, nearly six times the capacity of similarly sized televisions.

It is also equipped with a Bollywood Mode designed to optimize sounds for Indian content.

The new Jazz III also will offer 11 Indian languages and dialects, including Hindi.

In Africa, a new and updated version of LG’s battery television, the Battery Television Plus, will debut in the second half of the year.

Battery Television Plus can run for as long as 90 minutes. It also comes with internal satellite television tuners, so a separate set-top box is not required.

LG also strengthened its television features and functions for sales in South America and Central America consumers and the region’s 600 million footmball fans.

Arena Mode will make the grass of football pitches appear distinct and greene, and it also comes with an upgraded sound system.

The Time Machine function will allow viewer to record football games while simultaneously watching another channel.

Photo Goal will allow one to capture and edit game images.

Stadium LG is an app that offers information, statistics and analysis on players and teams.

Televisions also will come with Perfect Kick, a game that can be played through an Internet-connectable remote.

Emerging markets, including India, South America and Africa, account for two-thirds of television sales globally, according to LG.