Attorney emphasizes significance of the TPP

Attorney emphasizes significance of the TPP 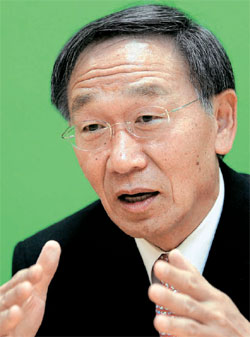 Attorney Kim Suk-han works in the mainstream legal circle in the United States.

With ties in both Seoul and Washington, the lawyer emphasized that acting as a founding member in the Trans-Pacific Partnership (TPP) would significantly help Korea develop better, stronger ties with the United States.

“Korea still has time for that,” the 65-year-old said in an interview on April 25 with the JoongAng Ilbo. “So, Korea must persuade the United States to be one of the founding members.”

After serving as a senior partner at the Washington-based Akin Gump, Kim started work last month at Arnold & Porter LLC, one of the country’s top law firms, with 10 team members.

With 800 lawyers, Arnold & Porter was ranked as one of the top 100 companies to work for in 2013 by Fortune Magazine. It was also recognized as one of the top 25 law firms in the United States by the Corporate Board Member, a publication put out by the NYSE Governance Service.

During his interview, Kim stressed that Korea must be a founding member of the TTP - the economic axis of the U.S. pivot to Asia - particularly with interest in the trade deal now higher than ever amid Japanese Prime Minister Shinzo Abe’s visit to Washington.

“The Obama administration is operating the TPP very strategically because it is one of the most significant tactics to rebalance toward Asia,” he said. “It might look like it is only a negotiation for [economic] trade, but it is practically a political one.”

“Japan is developing a closer relation with the U.S. as a founding member in TPP negotiations,” Kim continued. “If Korea stays outside of this issue, it won’t be helpful for Korea and for the relationship with Japan.

In the 1980s, Kim settled in the legal circle in Washington while managing cases with Korean and Asian companies.

Kim worked as a senior partner at Akin Gump as well as a member of the firm’s management committee.

As the head of Arnold & Porter’s Korean practice, he advises major Korean and American companies looking to do business in the United States and Korea.

Kim formerly served as first vice chairman to the U.S.-Asia Foreign Policy Council and counsel to the U.S.-Korea Foundation.