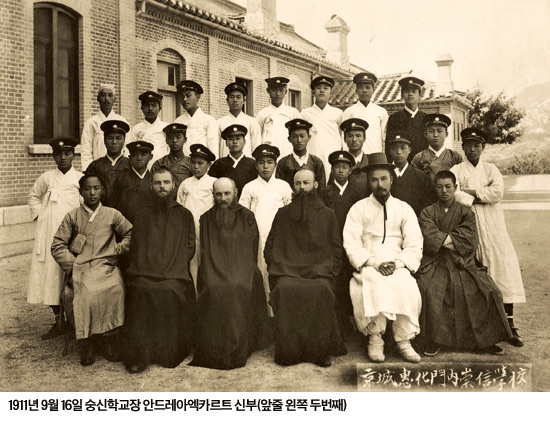 Father Andreas Eckardt (second from left in the first row) collected botanical samples on the Korean Peninsula in the early 20th century. He worked in Korea as a missionary.Provided by the Korea National Arboretum

Botanical samples collected by a German priest around a century ago recently saw new light when they were handed over to the Korea National Arboretum (KNA).

This is the first time a government agency has officially received a collection of indigenous botanical species from a foreign institute.

On Tuesday, the Order of St. Benedict Waegwan, the order’s primary monastery in Korea, donated 420 botanical specimens to the KNA in Pocheon, Gyeonggi. Those samples were collected from 1911 to 1914 by Father Andreas Eckardt, who led German missionaries to Korea in 1908.

Jang Gye-seon, a KNA researcher, said the donation will help researchers studying the types of botanical species present on the Korean Peninsula in the early 20th century, most of which disappeared during Japanese occupation from 1910-1945 and the 1950-53 Korean War.

Botanical samples donated by the Order of St. Benedict Waegwan. Provided by the Korea National Arboretum

“They are valuable materials for studying how botanical species on the Korea Peninsula have changed. Some samples were collected from pre-urbanized Suwon, Gyeonggi, and North Korean territory, like Mount Geumgang, Wonsan and Pyeonggan,” Jang said.

According to the researcher, it is not possible to conduct studies on the types of plants in what is now present-day North Korea.

Eckardt’s specimens included Diamond Bluebell, or Geumgang Chorong, Pteris excelsa, and Allium anisopodium. Diamond Bluebell collected at Mount Geumgang is endemic to the Korean Peninsula, but samples from the North that remain are rare.

The Pteris excelsa that Eckardt obtained from Jeju are known to be indigenous to the island, though the KNA has yet to find any.

A sample of Allium anisopodium was also collected from Suwon, though it has not been seen in the area for decades.

Each sample comes with a white paper attached stating the plant’s scientific name, date and region. On some, its local name in Korean was kept.

The samples, found by the German Order of St. Benedict in 2013, were then sent to Korea’s main monastery in Chilgok County, North Gyeongsang.

Eckardt - whose Korean name was Ok Nak-an - collected the samples nationwide, including Jeju. He later brought them to his native Germany.

Eckardt is well-known for his contributions in initiating modern education in the country. He was the principal of the country’s first private educational school in 1911 and established two other schools in 1921 and 1924.

The priest also contributed to promoting Korean culture in Europe, writing books about the country’s language, art, music and philosophy.

He published “Geschichte Der Koreanischen Kunst” (1929), a German-language book that covered the history of classic arts in Korea.

After returning to Germany, he became a renowned scholar of Korean studies, which he taught at the University of Munich.

The KNA plans to provide the samples as research material and upload that information online.