New KNSU president envisions the future of sports for Korea

New KNSU president envisions the future of sports for Korea 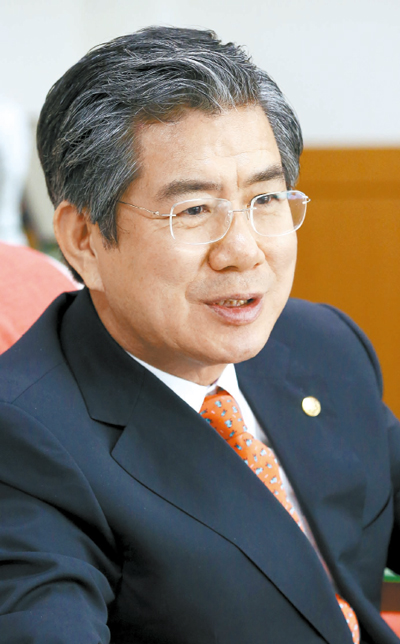 Korea National Sport University (KNSU) is a symbol of elite Korean sports. Since its establishment in 1977, students from the university have taken more than one-third of the medals won by Korean athletes, including gymnast Yang Hak-seon and speed-skater Lee Sang-hwa, in global sporting events.

Yet for two years, KNSU’s commanding position has stood vacant: For a number of reasons, the government did not approve four of the college’s presidential candidates.

That changed in February, however, when former three-time lawmaker Kim Seong-jo was rubber-stamped to lead the institution.

Critics slammed the designation as what’s known here as a parachute appointment, in which those with political or business connections are brought in to fill a position despite lacking experience.

Kim does not have a background in sports.

But the new president insisted his career outside sports could serve to be an advantage to the university and allow for objectivity in its decisions.

Q. You were approved as president on Feb. 5 but did not have an inaugural ceremony.

A. Considering the situation KNSU has faced, it was inappropriate to hold a ceremony like other colleges. Instead, I proclaimed the school’s vision. I set fairness as its main value. The announcement was to build KNSU as a hub of sports Hallyu (Korean Wave).

What do you mean by the hub of sports Hallyu?

When asked about KNSU, people often come up with a list of medalists. Our students have won 30 percent of the medals [in global sporting events]. When including graduates, it might be near 50 percent. To attend KNSU, you have to win at least third place in a national competition.

Sports Hallyu and the globalization of sports are very significant. Do you have a plan for it?

I plan to boost our Olympic winners as a sort of brand. [My plan] is to open sports lessons run by the medalists in other countries.

Park Joo-bong, a medal winner in men’s badminton at the 1992 and 1996 Olympics, and Kim Jin-ho, who achieved the country’s first gold medal in an international competition, are good examples. Also, we have a plan to expand our association with colleges and organizations outside the country, which currently stands at about 20.

By sending our students to other countries for training, it will make them more confident and improve their abilities. So through this process, we can push sports Hallyu.

You have looked into many aspects of KNSU. On which part do you want to put more focus?

The Pyeongchang Olympics. Drawing public attention is important, and preparation based on KNSU is also significant. There are many lesser known sports in the Winter Olympics. As the host of the event in 2018, Korean athletes have to participate in all sports, but we don’t have enough players. At KNSU, there are only 20 student winter sports athletes in each grade. This is a big problem as a host nation.

The regulation concerning student quotas at colleges in the metropolitan area is very strict. We need 40 student athletes in each grade for the Winter Olympics. I hope the Education Ministry temporarily allows us to expand the scholarship quota for the Olympics. Afterward, it can retract it.