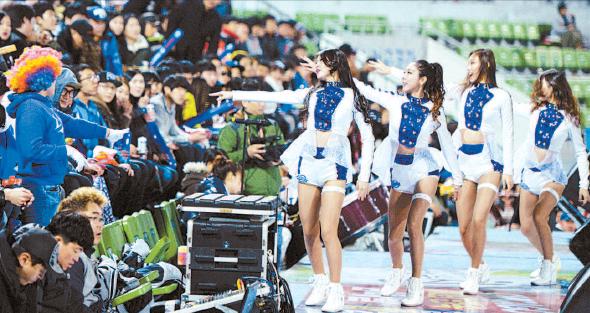 Samsung Lions cheerleaders perform during the KBO League game between the Lions and Lotte Giants on April 8 at Daegu Baseball Stadium. [NEWSIS]

Tensions were high during a March preseason game between the KT Wiz and LG Twins, but not because of the score. It all had to do with the cheerleading song of Wiz outfielder Lee Dae-hyung.

Lee’s song - “Super Sonic” - was used by the Twins in the past, and the Twins still retained the copyright for the track.

“We do produce original cheerleading tracks, but many are also remakes of other songs,” said an official from the Twins. “Since we pay for the right to use someone else’s music and turn it into a cheerleading song, that second copyright belongs to the team.”

Cheerleading songs are a signature component of the Korean Baseball Organization (KBO) and contribute to the league’s popularity. Fans visit the stadium to watch the game, but also to sing along with their team’s unique songs.

This has put pressure on teams to come out with good cheerleading songs - and to protect the ones that they use.

Cheerleading songs are usually divided into two types: a “theme song” which is played when a batter is up, and a “main song,” for when a player makes a hit or shows a great play during the game.

Players usually select their own theme song, sometimes at the recommendation of people from the entertainment industry who want to promote a particular track, and the songs often change throughout the season.

The main song is selected by the clubs’ marketing team and cheerleaders. They say that the most important aspect of choosing the song is finding a melody that people do not forget easily.

In addition, each team has about three to four songs made for the team. For instance, the Twins use “Apartment,” and the Giants play “Busan Seagulls.”

All in all, fans hear 50 to 60 songs during any given visit to the stadium.

However, all of these songs are not free. According to KBOP, the marketing affiliate of the KBO, the league’s nine teams pay about 300 million won ($279,250) to three local music associations for the right to use various tracks.

“Before the season, each team submits their cheerleading song lists to KBOP,” said Choi Won-jun, the marketing team leader for the affiliate. “KBOP accumulates the list and then gets permission from related associations like the Korea Music Copyright Association.”

Each club spent an average of 33 million won last year on music. Since each team had 64 games at home last year, about 520,000 won was spent per game, and considering that 50 to 60 songs were played in a game, the average price per cheerleading song was about 10,000 won.