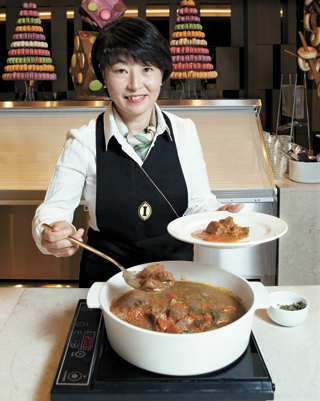 
Every great capital has a diplomatic corps representing their countries and promoting their own cultures. Ambassadors are expert entertainers and their spouses are often skilled at introducing the cuisine of their homeland to their foreign hosts. In this series, the Korea JoongAng Daily asks the spouses of Seoul’s ambassadors to introduce our readers to a favorite entree from their homelands. In each installment, her excellency will be joined by a chef from the Grand InterContinental Seoul Parnas who prepares a Korean dish that compliments the foreign offering. Mashitge deuseyo and bon appetit!

A Korean national who traveled to Belgium for her master’s degree, Choi Ja-hyun first met the love of her life, Francois Bontemps, on a crisp autumn day in 1982.

“I was studying at the school library, when suddenly out of nowhere, a man took a seat right in front of me and said with a charming smile, ‘Bonjour,’” she laughed. “I could never forget the warmth in that greeting. We started out at friends, but then the relationship developed into something much deeper.”

Thirty years went by as Choi accompanied Bontemps to all his postings. Having returned to Seoul in 2012 as the wife of the Belgian Ambassador to Seoul, the high-spirited woman of petite physique said it was “good to be home.”

Q. Why did you choose Flemish stew as today’s dish?

A. Flemish stew is one of the most famous Belgian dishes, and I suggested it because it is a very simple, popular dish that combines two key ingredients in Belgian cuisine: meat and beer. The essence of the dish is the interplay between the sweetness of the sauce and the sour taste of the beer. 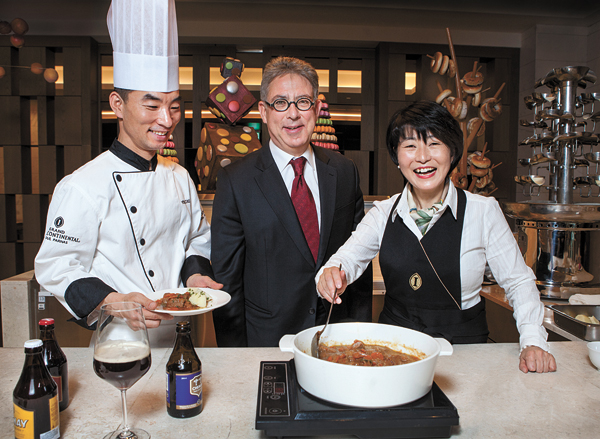 Each region and family in Belgium has its own way preparing Flemish stew; there is no such thing as a single definition of how to prepare it as every cook tends to add his or her personal touch. I usually add honey or brown sugar, whereas some other households add sliced bacon, mustard or ginger bread.

What Korean culinary aspect can you find in Flemish stew?

One can compare Belgian Flemish stew with Korean galbijjim, or braised beef ribs. The two dishes are similar in that they are beef-based, but then again, different in that the latter is served with meat attached to the bones. Some Belgian families add brown sugar or honey as an optional final touch to their Flemish stew, which tends to reduce the bitterness of the beer. When doing so, the strong sweetness quite resembles galbijjim. 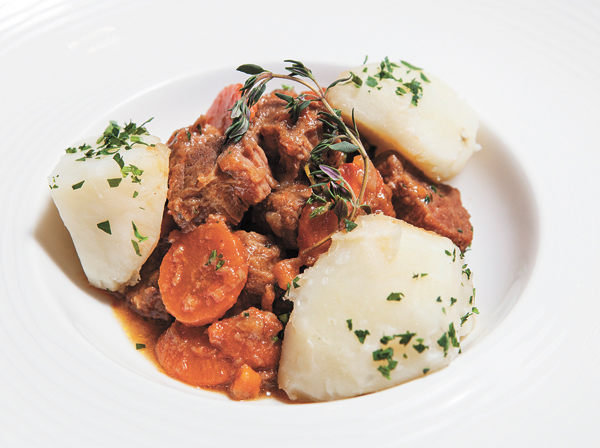 Located between Latin and German cultures, Belgium has long served a battlefield for Europe, as its people have become Germans, Romans, Spaniards, Dutch, French and Austrians. Belgian cuisine is derived from all these cultures, with pasta, olive oil and wine coming from Latin, and bread, butter and beer coming from German. Potatoes, chocolate and many different spices such as cinnamon, cloves, coriander nutmeg and ginger were introduced to Belgium from Latin America and the Far East, through the ports of Bruges, Gent and Antwerp. Thanks to the very innovative and imaginative character of Belgians, all those elements came together to form a sort of tool kit to form a variety of dishes.

Belgium is a food-obsessed country. Belgians love their local products and are proud of their regional specialties, from the North Sea Coast to the Ardennes forest. Being multicultural, food in Belgium is much more than a source of energy; it is pride and pleasure, an essential part of life and a means of identity. There is a saying in the southern region that goes, “Jamais pour se nourrir, toujours pour le plaisir,” which translates to: “Never just for nourishment, always for the pleasure.”

A typical family lunch gathering lasts from 12 to 5 p.m. It starts off with aperitifs and amuse-bouches like trout roe, and is followed by starters like tomatoes stuffed with grey shrimps, endive gratin or asparagus with mayonnaise. Then comes a soup, made out of peas, ham, onions and cheese, for instance. The main course could call for mussels and fries, salmon poached with white beer, pork blood sausage, steak fillet, waterzooi, blind flinches with Brussels sprouts or meat balls with fruit syrup from Liege. Before the dessert, Belgians have cheese, made out of milk from cows, goats or sheep, either soft or hard, fresh or with a pungent odor. As for dessert, there is plenty to choose from: from dame blanche, or vanilla ice cream with hot chocolate sauce, to pears poached in wine and chocolate. Then come coffee and pralines, followed by waffles - either Brussels- or Liege-style - pancakes or tarts. Tarts are usually made out of apples, prunes or cheese. 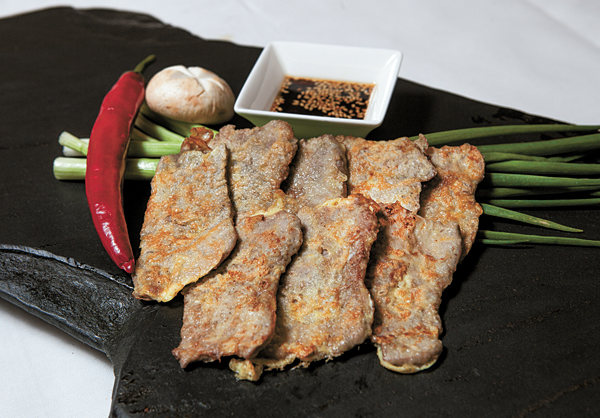 Belgians like wine but they prefer beer with their meal. White beers go well with fish, blond beer with chicken, dark beer with beef and fruit beer with dessert. Beers are also ideal in marinades, sauces or simply as a replacement for water as a means to simmer meat.

Food in Belgium has to be good and plenty, as a saying goes that Belgian cuisine is a combination of the fineness of the French and the generosity of the German cuisines.

For more information, I recommend “What’s Cooking in Belgium” (2013) by Anna Jenkinson and Niel Evans.

What ingredients from Belgian cuisine are easily found in Korea?

More and more Belgian products are easy to spot in Korea, but the problem is that it’s difficult to find really fresh items. Unlike Korea, each village and town square in Belgium has its own fresh market, where bakers, butchers and fishmongers are still very cherished.

Some Belgian beers that are commonly sold in Korea are Maredsous, Chimay, Leffe, Stella, Hoegaarden and beer from the Brasseries of d’Achouffe, de Rochefort, de Silly, du Bocq, Dubuisson and Brunehaut.

Endive, also called chicory or chicon, is a vegetable that mainly comes from Schaerbeek, in Belgium, and can be found at Sinsegae Department Store. I’ve been unlucky with grey shrimps, however, as they are chiefly found in the North Sea.

What are the best restaurants in Seoul serving Belgian cuisine or a similar one?

What Korean dishes is Ambassador Bontemps fondest of?

I cook twice a week at home, and we normally have Korean meals that are popular among everyone in my family. Living 30 years abroad, my Korean style of cooking is becoming more and more Westernized, whereas my Western dishes taste more and more Oriental. In Korea, there are many wonderful dishes based on vegetables, and I would like to try some fusion dishes using salad and fresh greens.

Please give us your personal observations about Korea, how it compares to Belgium or other countries in which you have lived.

I left Korea in 1982 to study in Belgium, and exactly 30 years later, came back to live in my mother country. During that time, Korea has changed in such a positive way, in terms of democracy, economic development and the medical care and insurance system. Korea is a very dynamic country, with everything progressing so fast. Sometimes, that very speed is too fast that it’s stressful to catch up.

My husband and I appreciate and respect all the generous efforts locals have made in building this country as it is today. But at times, I’m afraid that people are losing a sense of direction and missing out on the true value of life. I dream of a slower Korea, as there is slow cuisine in Belgium.

In Belgium, people have a slower daily lifestyle than in Korea and spend more time enjoying life in a simple way.

Choi was born in Seoul and graduated from Ewha Womans University with a bachelor’s degree in philosophy. She then earned a master’s degree in the same field at the Catholic University of Louvain in Belgium, where she met Ambassador Bontemps. They have been married for 30 years and have three children, all of whom were born in different places. Their 26-year-old daughter was born in Munster, Germany; 23-year-old son in Brussels, Belgium; and 17-year-old son in Madrid. Choi accompanied her husband at all of his postings: Singapore, Madrid, New York and Strasbourg, France.

Francois Bontemps has served as the Belgian ambassador to Seoul since August 2012. He previously held various positions, including the deputy director general of the Belgian Ministry of Development Cooperation from 2009 to 2012 and the deputy representative to the Council of Europe from 2006 to 2009. Born in Ypres, Belgium, in 1959, Bontemps earned his master’s degree in philosophy from the Catholic University of Louvain, and went on to study economics for his master’s at the University of Munster in Germany.