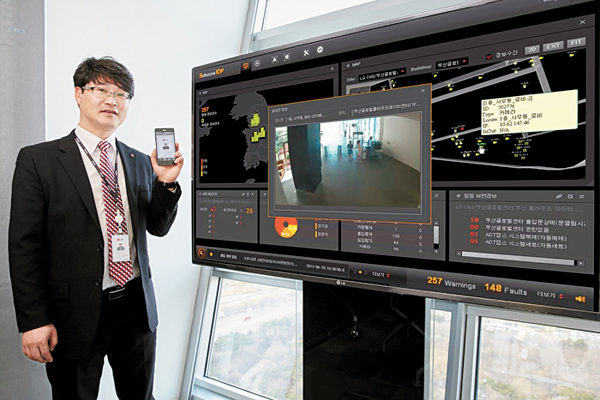 Jin In-taek, director of LG CNS who made the mobile identification system used at LG, demonstrates how CCTV technology is integrated with his entry-exit management system. Provided by LG CNS

Corporate badges used to hang around the neck, their function typically confined to allowing entries and exits.

But in today’s rapidly evolving technological environment, ID cards have become digital and are taking on more diverse roles.

The cards are now typically embedded in mobile phones and their functions range from paying for public transportation to making small financial transactions with strengthened security.

Samsung Electronics’ research institute for handset division ditched the traditional ID cards. Instead, workers’ corporate badges are embedded in their Near Field Communication (NFC)-enabled smartphone. NFC technology enables electronic devices in close proximity to detect and communicate with one another.

One advantage of these digital cards is enhanced security, given that the conventional ID cards can be easily manipulated if they find their way into the wrong hands.

Many companies have taken advantage of the digitized badges.

With the new system, LG Group can manage the entrances and exits of workers from different affiliates in a more comprehensive way, while workers save time when they visit affiliated companies.

The shortcomings of the old identification system prompted LG Group to take a new approach.

Until the early 2000s, LG used a pocket-sized card with embedded integrated circuits. Named the Smart Card, it used a simple numeric code for each personnel. Inputting and changing the numbers following contingencies required great time and resources. The conglomerate, with its tens of thousands of workers, required a staff to work exclusively on managing the card’s data system.

When the former employees failed to properly communicate with the staff about their whereabouts or the loss of their card, outsiders could sneak into the company.

When Jin In-taek of LG CNS considered the flaws of the existing card technology, an idea struck him. He envisioned an ID card that worked much like a computer. He installed a central processing unit into the mobile ID card and created an operating system for it.

Instead of using a simple set of numbers, the system utilizes methods of data encryption that improves security. The computerized system enables the card to be used as a transportation card, and employees can also use it to make small payments.

More sophisticated technology is expected soon, as the market concerning the control of staff entries and exits continues to grow. Korea Trade-Investment Promotion Agency (Kotra) found that the market is estimated to be worth $17.8 billion this year. Back in 2010, the value was just $11.8 billion.

The business grows at an average rate of 8.5 percent every year.