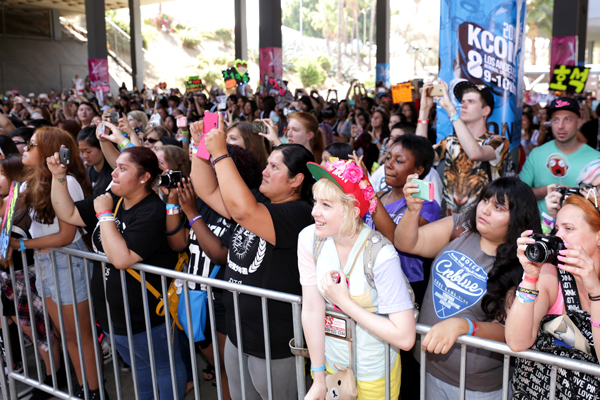 The economic effect of the so-called Korean Wave, or Hallyu, was estimated to be 12.6 trillion won ($11.6 billion) in 2014, an analysis by Korea Trade-Investment Promotion Agency (Kotra) and the Korea Foundation for International Culture Exchange showed on Sunday.

The figure indicates that Korea’s industrial output rose 4.3 percent, owing to the popularity of Korean pop stars and goods last year compared to a year earlier, the report said. Among industrial sectors, the gaming, tourism and food and beverage sectors grew most notably.

Production inducement - which refers to the increased amount of production determined by final demand - has continued to grow since 2011, according to the Kotra data. The growing popularity of the Korean Wave, led by young Korean pop artists, has reached many parts of the world in recent years from Southeast Asia to Latin America, helping boost sales of Korean products abroad. 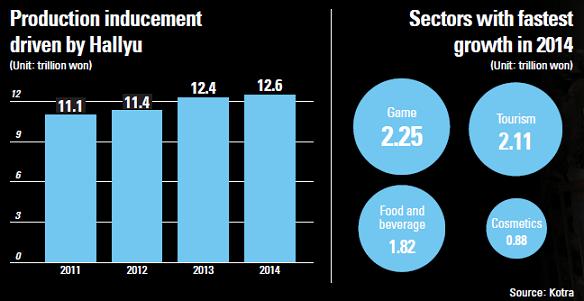 The Korean Wave also contributed to the creation of as many as 102,326 new jobs in Korea, the data showed. The number of new jobs rose 4.7 percent from a year earlier.

Exports of cultural content and consumer goods stood at $6.16 billion abroad in 2014, an 8.4 percent increase from the previous year, the data showed. The increase is 2.3 percent higher than the country’s total export growth last year, indicating that Hallyu led in overall exports, the main pillar of the Korean economy.

Through a survey of 7,216 consumers in 29 countries, the report also found that consumption of Korean culture is growing the fastest in countries like Malaysia, Myanmar, Vietnam, Uzbekistan and Indonesia.

In Mexico, the United States, Argentina, Germany, Russia and Brazil, the popularity of Hallyu is expanding at a consistent pace, the survey showed. The Korean Wave is lagging in India, Iran and Japan, it added.

“Kotra will provide systematic analyses into the growth of Korean pop culture’s popularity in order to help boost exports of small and medium-size businesses,” said Jeong Byeong-seok, head of the knowledge service division at Kotra. “We will help them tap into Hallyu and increase their exports.”