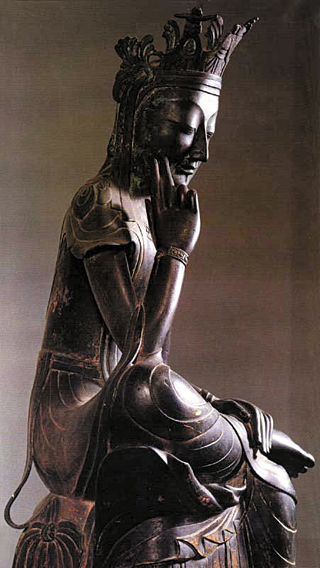 This 80-centimeter gilt-bronze Maitreya Bodhisattva is seated on a stool-like pedestal with his right leg crossed over his left and the fingers of his right hand pensively touching his cheek.

It was acquired by a Japanese collector in 1912 and donated to the Japanese Government-General of Joseon, which kept it at its museum since 1916. Currently, it is on display at the National Museum of Korea.

He has a squarely plump face with a benign smile and a sleek body.

The bodhisattva is wearing lavishly decorated headgear, of which two strands are drawn over its shoulders.

The oval pedestal is decorated with a lotus motif, but the mandorla (Buddhist halo of light) is missing.

An X-ray inspection carried out in 1963 revealed no defect or evidence of repair.

Art historians believe it was made in the mid- or late 6th century when the Korean style of bodhisattva images emerged.