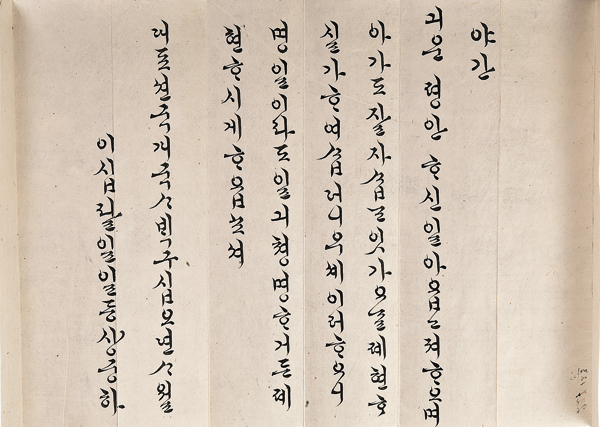 A letter by a court lady surnamed Ha addressed in 1885 to the wife of a Russian envoy to Korea.Provided by the National Hangeul Museum

“Mother, I killed a man today. I threw a grenade, a terrible explosive device, and killed him instantly.

His correspondence was penned just three months after the onset of the 1950-53 Korean War, a conflict that changed the trajectory of the nation for good.

“Mother, I want to eat sangchussam [lettuce-wrapped rice]. I also want to drink up icy cold water from the spring.

But he never did. The boy died just a day later.

Lee’s letter was found in a journal stuffed into his pocket when his body was taken away. 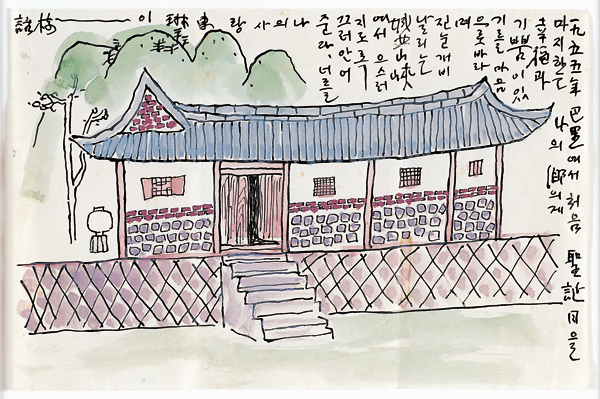 Now, the correspondence to his mother is just one of about 100 handwritten letters in Hangul (also spelled Hangeul)- the Korean alphabet system created in 1446 - displayed at a new exhibition at the National Hangeul Museum.

Before the script’s creation, Koreans resorted to using Chinese characters, while writing itself was reserved only for nobles. But with the advent of the Hangul, women as well as those in lower classes could become literate.

Koreans are extremely proud of their indigenous writing system for that reason, as well as for its ease and scientific and philosophical purposes.

The National Hangeul Museum, opened in October 2014 within the grounds of the National Museum of Korea, was built to celebrate and promote this alphabet system.

Its first special exhibition since opening, “Read Society Through Its Hangeul Letters,” is filled with historical correspondence - some official letters, others personal; some sad, others pleasant.

The letters include those written by a slave, a lady of the court, as well as Joseon-era (1392-1910) royalty - evidencing just how prevalent and Hangul was.

“It’s interesting how we’ve obtained some hangul letters written just several years after the creation of Hangul,” Kim Sang-tae, the director of the museum’s exhibition division, told the Korea JoongAng Daily on April 20. “It shows that Hangul spread across Joseon society very rapidly.”

Na’s letter, which he wrote as he was being transferred to a new post in Hamgyong in modern day North Korea, was uncovered in 2012, in a tomb belonging to one of Na’s descendents in Daejeon.

The letter is one of the oldest in existence written in Hangul.

Another section in the exhibition displays the letters written by Korean coal miners working in Germany. In an attempt to bring prosperity to the war-torn South, the Korean government sent 7,936 men to Germany between 1963 and 1977 to work in the mines. In exchange, the Korean government received loans from Germany to build factories and infrastructure, making rapid economic growth possible. 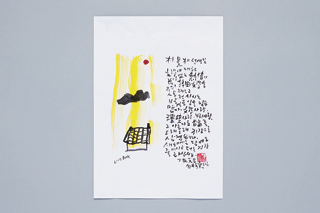 A 2008 letter by novelist Baek Si-jong addressed to Park Kyung-ni. Provided by the National Hangeul Museum

Kim included drawings in many of his letters, making them visually appealing as well. In particular, he wrote many letters to his wife, Kim Hyang-an (1916-2004), while he resided in New York in 1964. Although many cover personal subjects, they also contain his thoughts on the art scene there and his works, which museum officials say have high academic value.

Korea’s attempts to promote its alphabet abroad, both as a writing system and motif for artworks, is also seen in a category of letters written in Hangul by foreigners.

“Historically, Hangul letters have been the most popular tool and medium for interaction in Korean society,” the museum stated in a press release. “So within these stories in these letters is the past and present of the Korean people.”

Talks with the curators are available for night-time visitors to the museum between 7 and 8 p.m. on Wednesdays. 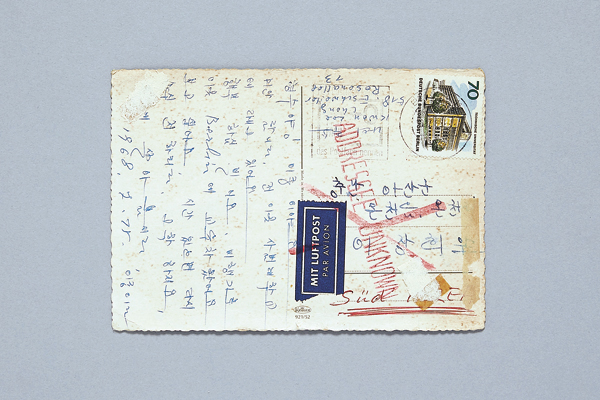 A 1968 postcard by Kwon Yi-chong, who worked as a coal miner in Germany. Provided by the National Hangeul Museum

*The exhibition “Read Society Through Its Hangeul Letters” runs until June 7 in the special exhibition hall of the National Hangeul Museum in Yongsan, central Seoul.
Admission is free. The museum opens at 9 a.m. and is closed on Mondays. Closing hours are 6 p.m. on Tuesdays, Thursdays and Fridays; 9 p.m. on Wednesdays and Saturdays; and 7 p.m. on Sundays and holidays. For more information, visit the museum’s website, www.hangeul.go.kr, or call 02-2124-6200.