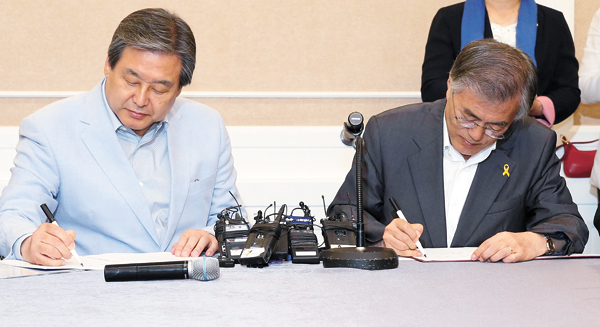 Saenuri Chairman Kim Moo-sung, left, and NPAD Chairman Moon Jae-in sign an agreement on reforming the pension system for government employees on Saturday at the National Assembly. By Kim Kyung-bin

The ruling and opposition parties agreed to put to a vote on Wednesday a long-awaited reform plan for Korea’s debt-stricken civil servant pension system that aims to reduce the government funds used to cover the losses.

The decision on Saturday followed months of wrangling over the scope and depth of the changes to be made on the system, which consumes more than 8 billion won ($7.4 million) daily just to stay afloat.

The legislation, which is expected to pass without much difficulty, calls for an increase in workers’ monthly contributions from their salaries - up to 9 percent from the current 7 percent - over the next five years.

It would also reduce entitlement payments from the current 1.9 percent to 1.7 percent in the next 20 years.

“The agreement [today] does have some shortfalls in it, but nevertheless reflects our drive for structural reform [for the pension system] and the redistribution of wealth,” Kim Moo-sung, the chairman of the ruling Saenuri Party, said Saturday during the agreement’s signing.

Moon Jae-in, his opposition counterpart, echoed his sentiments, noting: “The ruling and opposition worked together to keep the promise made to the people that we will reform the government pension plan by the deadline.”

The reform means approximately 333 trillion won in government funds could be saved by 2085, both parties said.

The plan, however, scales back the government’s proposal, which calls for an increase of up to 10 percent in contributions and decreasing entitlement payments to 1.65 percent - about 0.05 percentage point lower than in the parliamentary plan.

Overhauling the pension system for government workers was seen as a necessary fix, and lawmakers from both sides expressed concerns over the potential burden that would be imposed upon taxpayers just to keep the program running.

In his speech before lawmakers last month, Saenuri floor leader Yoo Seong-min cited the 2014 national budget white paper, which noted that of the “1.2 quadrillion won in national debt, 53 percent, or 644 trillion won, had come from the money borrowed to maintain pension rates for government workers and military servicemen and women.”

In addition to passing the reform bill on Wednesday, the two leaders also agreed to form a task force to seek ways to bolster the current national pension system, which has been criticized for providing insufficient benefits to retirees.

In that regard, both parties agreed to put about 20 percent of the estimated 333 trillion won to be saved under the reform plan - or about 70 trillion won - into the national pension system for non-government employees or the self-employed.

Most importantly, the two agreed to push for a 10 percent increase in pension coverage for a subscriber’s nominal income level, to 50 percent from the current 40, in a decision that has drawn sharp protest from the Blue House.

One Blue House official even reportedly claimed that parliament was overstepping its authority.

The government worries that it will require much more than what would be saved under the reform plan to cover a 10 percent increase in national pension coverage.

During his visit to the Assembly on Saturday, Welfare Minister Moon Hyung-pyo argued that such a move would force the government to pay an additional 570 trillion won for an increase by 2065.

Moon added that to cover the 10 percent increase, asking subscribers to make higher contributions was inevitable, and doing so would require a social consensus.

The drive to increase coverage to 50 percent comes eight years after a reform plan under the Roh Moo-hyun government in 2007 reduced the coverage rate to the current 40 percent amid fiscal sustainability concerns and worries over a rapidly aging society. Before then, the rate was 60 percent.

President Park Geun-hye is expected to rebuke the consensus to raise national pension coverage during a Blue House meeting scheduled for today.