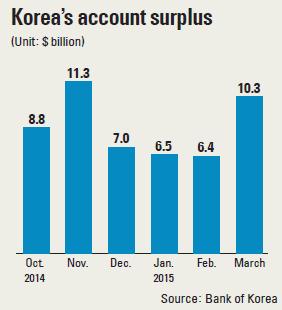 Korea’s account surplus continued to rise in March, continuing its 37-month surplus streak, with imports diminishing at a faster pace than exports, data from Bank of Korea showed on Monday.

Korea recorded a trade surplus of $10.3 billion in March, totaling $23.4 billion in the first quarter of this year, according to a monthly report released by the central bank.

Year-on-year, the trade surplus for March rose 42 percent, up from $7.3 billion a year ago, the report said. The quarterly level of trade surplus also jumped 54 percent this year from the same period in 2014.

Despite the weak yen and dollar against the Korean won eroding pricing competition for Korean exports, the trade surplus came as imports dropped at a faster rate than exports.

The decrease in imports was mainly driven by a fall in the prices of raw materials, including crude oil, by a total 28.1 percent.

Exports were also affected by falling oil prices, dragging down prices of petrochemical products by 32.4 percent from just one year ago.

But other major exports also dipped: home appliances by 19.1 percent, display panels by 8.8 percent and automobiles by 7.7 percent.

Exports to Japan, for instance, plummeted 23.1 percent in March year-on-year, while those to the European Union fell 9.8 percent. Exports to the Southeast Asian countries also dropped 11.4 percent.

Some economists and analysts in Korea have referred to the years-long trade surplus as a “recessionary surplus,” further claiming that the surplus does not mean the Korean economy is rebounding.

“Affected by the low oil prices, we saw about $8.9 billion surplus in commodities trading in the first quarter of the year,” Roh Chung-sik, a BOK official, told reporters.

Shrinking exports requires them to cut the country’s key policy rate, which is already historically low at 1.75 percent, to boost price competition for Korean products in the international market.

But they are also facing the possibility of a U.S. Fed rate hike this year, which could spark an exodus of foreign funds from emerging countries, including Korea.

BOK chief Lee Ju-yeol expressed concerns over Korea’s sluggish exports but said he would not decide on a rate cut just for exporters.

“If boosting exports was the BOK’s only task, we would [cut the rate], but we need to consider all of the economic factors for a rate cut,” Lee said Sunday on the sidelines of the Asean 3+ summit in Baku, Azerbaijan.

Still, he forecast the U.S. Fed would not sharply raise the rate, given the pace of economic growth in the United States.