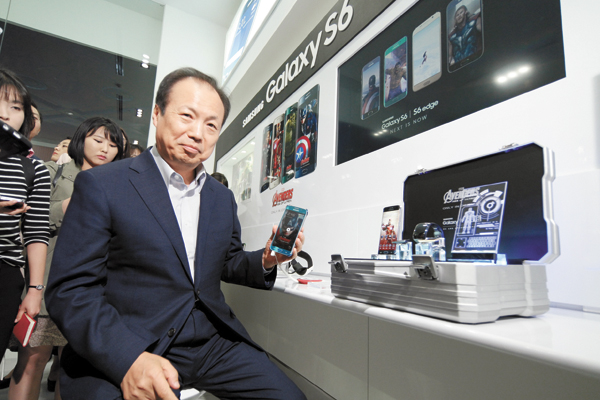 Shin Jong-kyun, CEO of Samsung Electronics’ IT and Mobile Division, holds up a Galaxy S6 displaying an “Avengers: Age of Ultron” theme on Monday at COEX. Provided by the company

Samsung Electronics will launch an “Iron Man” edition of the Galaxy S6 Edge in the next month, the latest in a series of partnerships between the smartphone giant and Marvel Entertainment.

The collaboration will be different than the most recent “Avengers: Age of Ultron” partnership because it won’t be limited to display themes or accessories.

She announced the collaboration Monday after a screening of the latest Avengers sequel with other executives, including smartphone division CEO Shin Jong-kyun, at the Mega Box theatre at COEX in southern Seoul.

Lee declined to give more details about the phone, saying that “it is hard to reveal every detail because this is a collaborative work with Marvel.

“But we will make sure that people will know it’s an Iron Man collaboration as soon as they see the phone,” she added.

The partnership between Samsung and Marvel kicked off in June 2014 with the launch of the Galaxy Tab S in New York.

At the time, Marvel said that it would host a “wealth of exclusive content” on Samsung devices as part of the deal, while Samsung would use Marvel’s content in its services and designs.

As the release of the latest Avengers film and the Galaxy S6 and S6 Edge devices coincided, the two companies used the partnership to support one another.

Samsung Electronics provided an Avengers-style theme on Samsung’s mobile store, as well as Avengers-related accessories for their new handset. Their latest collaboration, a free app titled “Battle for Avengers Tower,” was released earlier this month. Utilizing Samsung’s Gear VR headset, the app will allow owners of those devices to get a full 360 view of an animated battle.

With the Galaxy S6 series released on April 10, reporters’ questions focused on sales of the flagship smartphones.

“[The Galaxy S6] has sold well across the world,” said Shin, “and it will sell more in May.”