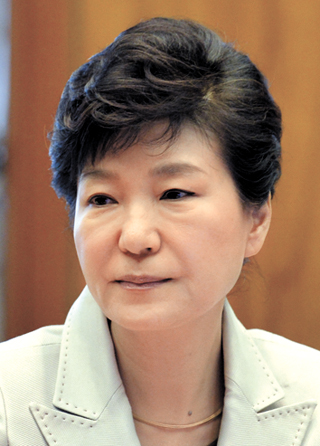 President Park Geun-hye denounced the legislature on Monday for pushing ahead with a misleading, populist reform plan for the national pension system by exploiting its mandate to overhaul the debt-ridden pension program for civil servants.

Wrapping up months of wrangling over the scope and depth of the changes to be made to the civil servants’ pension system, the ruling and opposition parties signed a deal on Sunday to reform the program - which consumes more than 8 billion won ($7.4 million) a day just to stay afloat - by increasing government workers’ monthly contributions while reducing their entitlement payments.

In addition, the ruling Saenuri Party and the main opposition New Politics Alliance for Democracy (NPAD) agreed to form a panel to overhaul the national pension system and decided on a 10-percentage-point increase for the wage replacement ratio, up from the current 40 percent of the nominal income level.

“During the process of negotiating a reform plan for the public servants’ pension, a deal was made that the income replacement ratio based on nominal salary will be increased to 50 percent,” Park said. “Changing the national pension scheme, subscribed to by more than 20 million people, is a matter that will put a heavy burden on the public. This is an issue that must be approached separately and differently from reforming the pension program for civil servants.”

“Because public burden will largely increase, national consensus is a prerequisite,” she continued. “Lawmakers must consult with concerned ministries and find a national understanding to deliberate on it more carefully.”

The president also lamented that the ruling and opposition parties’ reform plan for the civil servant pension program was disappointing, although it was noteworthy that they managed to meet the self-imposed deadline.

“We decided to reform the civil servant pension program because the current scheme puts a great strain on the future generations and has brought about a fiscal crisis,” she said. “Based on this plan, the government’s burden will be somewhat reduced because only 6 billion won a day, instead of 10 billion won a day, will be needed to keep the pension afloat starting next year. But the scope of the reform and the 20-year duration over which the overhaul will be complete fail to satisfy the people’s expectations, and I am dissatisfied with it.”

The reform bill is scheduled to be put to a vote on Wednesday, and the revised system will take effect starting next year. Changes for the national pension system, however, will further be reviewed before a revision is drafted. The ruling and opposition parties agreed earlier that the bill will be voted on in September.

The public reacted angrily to the National Assembly’s attempt to change the national pension scheme. In order to increase the income replacement ratio by 10 percentage points, about 1,669 trillion won is required by 2083, but the lawmakers on Sunday did not present a plan for how to do so.

According to lawmakers, 67 trillion won - or 20 percent of the 333 trillion won to be saved from overhauling the civil servants’ pension - will be spent to pay the premiums for low-income households, assistance programs for maternity leave and military duty and unemployment subsidies.

Experts and the government told the JoongAng Ilbo that two methods are available to accommodate the 10-percentage-point increase in the income replacement ratio.

If the reserve fund is used, it will dry up four years earlier than the current schedule in 2056. After that point, subscribers will have to pay 25.3 percent of their incomes to keep the system afloat.

The second option is to increase the premium; the Ministry of Health and Welfare said subscribers, who are currently paying about 9 percent of their salaries, will have to pay as much as 18.85 percent to accommodate the change.

“I don’t know why lawmakers are talking about changing the national pension all of a sudden, when they are tasked to reform the civil servant pension,” said Kim Sang-hyeon, a 35-year-old office worker living in Seongnam, Gyeonggi. “When I heard that the income replacement ratio would be increased to 50 percent for the national pension scheme, I thought it was a good change at first. But when I heard that I may need to pay double the premium, I was dumbfounded.”

Amid criticism over the plan to change the national pension program by the president and the public, the ruling Saenuri Party was quick to dodge the controversy on Monday.

“I agree with many parts of the president’s comments and humbly accept her criticism,” said Saenuri Chairman Kim Moo-sung.

Rep. Yoo Seong-min, the ruling party floor leader, added that changing the national pension system required public consensus, and that it wouldn’t be easy to carry out the agreed change considering that any increase in premiums has also been met with protest. Rep. Kim Young-woo, senior spokesman of the ruling party, said the party would wait and analyze the opinions of the discussion panel soon to be formed to address the overhaul of the national pension system.

A Saenuri source continued that the agreement on the change in the national pension system was political, with the main opposition New Politics Alliance for Democracy needing something to persuade the civil servants’ union and the hard-liners inside the party.

Although the ruling and opposition parties agreed that a panel will be created to explore possibilities in bolstering the efficiency of the national pension system, increasing the income replacement ratio to 50 percent as agreed last week was destined to be shelved, the source told the JoongAng Ilbo.

The NPAD has said it will push forward with the changes, however, and criticized the Blue House and the ruling party for trying to ditch the deal after just one day.

“If the Blue House and the Park administration think they can casually overturn the agreement between the ruling and opposition parties, it reveals the president’s intention to control the National Assembly,” said Rep. Woo Yoon-keun, the NPAD floor leader.

Woo also urged the ruling party to respect their agreement and approve it as scheduled.

On Monday, a group of NPAD lawmakers who negotiated the reform plan for the civil servants’ pension held a press conference, where they criticized the Park administration and the ruling party for intimidating the public with deceptive information.

“According to the National Pension Service, the 10 percent increase for the income replacement ratio is possible by increasing the premium by just 1.01 percentage points from the current 9 percent,” said Rep. Hong Jong-hak, the deputy chief policy-maker.

NPAD Chairman Moon Jae-in also made clear that the main opposition party would not give up on the agreement. He said the change was first initiated during the liberal Roh Moo-hyun administration, when he served as the presidential chief of staff, and that NPAD was pushing it forward to keep its past promise.

Another NPAD lawmaker, Kim Sung-ju, said companies also had a responsibility to shoulder the burden for the change.

“The government, individual subscribers as well as companies all need to pay,” Kim said. “It is particularly important how much the companies will pay. In some European countries, companies are paying the full amount for the national pension.”