Organ transplants give boy a chance at a new life

Organ transplants give boy a chance at a new life 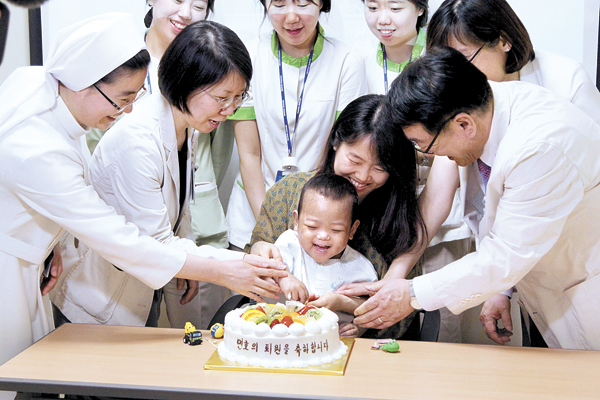 Hyeon-ho, center, celebrates being discharged from the hospital with his mother and medical staff on Friday. Provided by Seoul St. Mary’s Hospital

Since he was 2 months old, the youngster has suffered from a rare condition known as intestinal pseudo-obstruction, in which muscle or nerve impairments make it difficult for food or water to pass through the bowels. The condition can also affect other organs and cause complications such as bacterial infections or even fatal blood infections as food inside the intestine spoils, the Seoul St. Mary’s Hospital explained.

Friday was a monumental day for Hyeon-ho: He was discharged from the hospital after receiving transplants for his stomach, duodenum, pancreas, spleen, jejunum, small intestine and large intestine - an event that at one point seemed impossible given the complexity of the procedures and the difficulty in finding donors.

It was in summer 2013 when the boy’s parents decided that organ transplants would be the best option and visited Prof. Lee Myung-duk at St. Mary’s Hospital, who is known for having completed the first successful small intestine transplant in Korea.

Lee registered Hyeon-ho on a waiting list for organ sharing, but the possibility that he would be able to find a match was low: The organs would have to be of a similar size, and organ donation among children in Korea is extremely rare.

That changed in November, however, following the tragic death of a 4-year-old child in a fatal car accident. That tragedy gave Hyeon-ho a glimmer of hope - doctors believed the transplant could be a success, as the children were around the same size.

Prof. Kim Ji-il performed the donor’s surgery and took charge of Hyeon-ho. The operation, which took over 18 hours, is Korea’s first successful case in which six organs were transplanted, with the exception of the liver.

There was previously one case in which a patient received all seven organ transplants at once, though the hospital explained that Hyeon-ho’s case was more difficult because he did not need the liver, which meant it had to be carefully extracted.

After the operation, the 3-year-old had several setbacks, including infections and his body wanting to reject the new organs. But after a long journey, the boy can now eat by himself, without the aid of a feeding tube.

“I think we were able to achieve a good result because all of us - the boy, his parents and the medical staff - worked hard together,” Lee said.