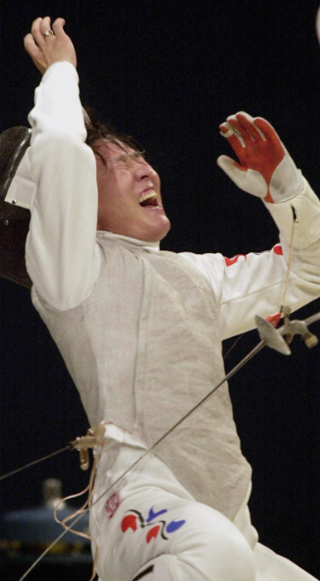 For over a century since fencing became an official sport at the 1896 Athens Olympics, fencers from Europe stood atop the podium.

“When I was young, I used to play with my friends with sticks, and as I looked at kids in white uniforms playing with swords, it just fascinated me,” Kim said in a 2014 interview with Incheon Asian Game officials. “I just knew that when I played this sport, I would do good.”

Yeonsan Middle School was in rural village, but it was one of a few schools outside Seoul with a fencing club, and Kim joined in his second year.

By the time he was senior at Chungnam Mechanical Technical High School in Daejeon, Kim had been dominating national tournaments and was Korea’s top prospect. Kim said that he was in a “do-or-die mode” during high school, as he wanted to impress a girl with whom he fell in love at first sight. That girl was fencer Kim Young-ah, whom he married in 1996.

Kim became a member of the national team in 1990 and made his Olympic debut in 1992 in Barcelona, failing to pass the qualifiers.

But as he gained experience on the international stage, Kim steadily moved up.

After winning a gold medal in team event at the 1994 Asian Games in Hiroshima, Japan, Kim’s goal was to win Korea’s first fencing medal at the 1996 Summer Games in Atlanta, which he recalls as a turning point of his fencing career.

In the quarterfinals, Kim met then world No.1 Alessandro Puccini of Italy. He was leading 13-11 with 30 seconds left in the third round. But when Puccini called a time out, Kim saw the results of other quarterfinal matches and two French fencers he was confident of beating were already in the semifinals.

Kim thought a gold medal was just around the corner if he could beat Puccini. Instead, Kim lost concentration, eventually losing to Puccini who later took the gold medal.

“I was so disappointed and angry at myself after the event,” he said. “I broke my swords and just spent days drinking.” 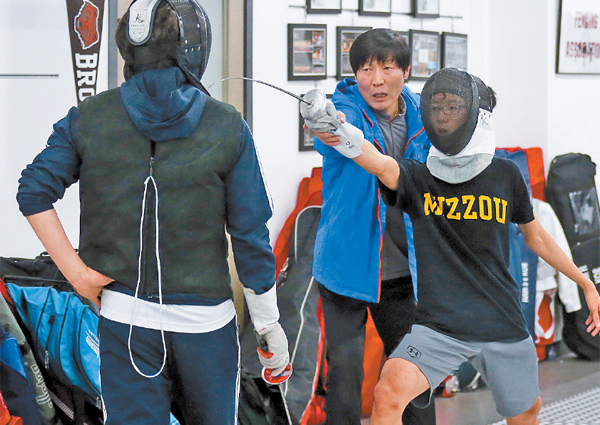 It was a bad time for Kim, but with help and advice from then Korea Fencing Federation (KFF) President Chang Young-soo, he started training again.

The experience in Atlanta made Kim stronger. In 1997 in South Africa, Kim became first Korean to win a medal in the World Fencing Championships with one of the event’s most memorable performances.

In the final, he met Sergei Golubitsky of Ukraine, at one point trailing 10-1. But Kim made nine consecutive points for a 10-10 stalemate.

“When I was losing 1-10, maybe he underestimated me too much as he tried to dance with me on the stage,” Kim recalled. “That turned on my competitive spirit, which even eased a cramp in my leg.”

In the end, Kim lost the match to Golubitsky, 15-14, but it was the performance that put him on the radar of the global fencing community. Kim recalled that if he had won the final at the 1997 Worlds, he might have not competed in the 2000 Sydney Olympics.

At the 1998 Asian Games in Bangkok, Kim won silver medals in the individual and team events.

But after the competition, he underwent surgery for pneumothorax, when air leaks into the space between the lungs and chest.

Just a week after his surgery, Kim entered the Taereung National Training Center. After finishing third at the 1999 Worlds, he won Fencing World Cups in Iran and Austria, as well as the 2000 Daewoo Grand Prix.

But after April 2000, he didn’t appear at international events in order to develop new techniques to use as a “secret weapon” in the Olympics. Kim recalled he practiced moves 1,000 times daily to master new techniques.

Kim said he was confident about winning the gold in 2000.

Lee Sang-gi won bronze medals in men’s epee before Kim competed, so the pressure on Kim to bring home Korea’s first medal was off.

After sweet revenge against Golubitsky with a 15-5 victory in the quarterfinals, Kim edged Russia’s Dmitriy Shevchenko, 15-14, to reach the final against No.1 Ralf Bissdorf of Germany.

Kim was leading, 14-11, in the third round, but one point away from the gold he allowed deuce. Thinking about what happed in 1996, Kim concentrated for one last attack. Moments later, he was on his knees, arms raised in celebration of a victory remembered to this day.

The impact of becoming first Asian fencer to win an Olympic gold meal was immense. After his victory, there were reports of more than 30 fencing teams established in local schools.

Kim struggled after his historic victory, losing to Bissdorf in the 2001 Worlds and failing to medal at the 2002 Busan Asian Games.

Kim retired in 2003 and was an assistant coach for national team until 2008. He received the Blue Dragon of the Order of Sport Merit, Korea’s highest award for athletes, in 2006.

Since Kim paved the way, Korea has impressed in global fencing, winning two gold medals, one silver and three bronze at the 2012 London Olympics.

These days, Kim focuses on promoting fencing and coaching at the Lourus Fencing Club in Seoul.

“I see people who fence as my students and brothers,” he said. “I always hope they play with desperation in mind and concentrate only on the game.”