Jeonbuk, goalkeeper back on track

Jeonbuk, goalkeeper back on track 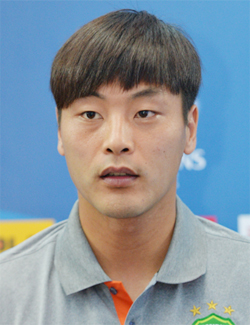 As many experts predicted, Jeonbuk Hyundai Motors is cruising in the defense of its K-League Classic title.

On Saturday, Jeonbuk beat the Suwon Samsung Bluewings, 2-0, at Jeonju World Cup Stadium. Jeonbuk now has 22 points with a record of seven wins, one draw and one loss, seven points ahead of second-place Jeju United, which won Ulsan Hyundai on Tuesday.

In the match against Suwon, Jeonbuk’s two Brazilian forwards - Eduardo Goncalves de Oliveira and Leonardo Rodrigues Pereira - each had a goal to tie Suwon’s Yeom Ki-hun for the league’s scoring lead.

“From the match against the Jeonnam Dragons to the first half of the Suwon match, we didn’t play our best,” said Kwon, 30. “But we felt comfortable that this situation had to be overcome, and as players we were unified and able to get three points.”

In mid-April, Jeonbuk had an unbeaten streak of 22 matches, but on April 22 it lost to Japan’s Kashiwa Reysol, 3-2, in the AFC Champions League. Then on April 26, it lost to regional rival Jeonnam, 2-1, in the K-League Classic.

“I had a conversation with goalkeeper coach Choi Eun-sung and I felt that I had not been 100 percent focused during the unbeaten streak,” said Kwon. “Eun-sung pointed out that since we gave up five goals in past two matches, I should try harder.”

In the match against Suwon, Kwon had a scare in the 87th minute, when Suwon striker Jong Tae-se struck a powerful shot.

According to Kwon, who has played with Jeonbuk since 2006, there was “natural pressure” from Choi Kang-hee before the match as the 56-year-old coach talked to him about conceding goals.

“After the match, coach asked me, ‘When was the last time you had clean sheet match?’ and I just had to answer, ‘It’s been a long time,’?” Kwon said with a smile.

For Jeonbuk fans, Kwon’s impressive saves are important and something they are proud of. The 184-centimeter (6-foot) Kwon was selected as Best Goalkeeper in the K-League Classic last year and is a two-time league champion.

Not surprisingly, there has been talk that Kwon should be playing for the national team.

In 2012, he was on the squad when Jeonbuk coach Choi was leading the national team. However, he never played in a match.

“Whenever I heard about a story regarding national team, honestly, it caused me added pressure,” he said. “Playing for the national team is every footballer’s dream, but important matches are coming up for my team. We are defending the league title and looking to win the AFC Champions League.”

The team needs at least a draw to reach the round of 16.