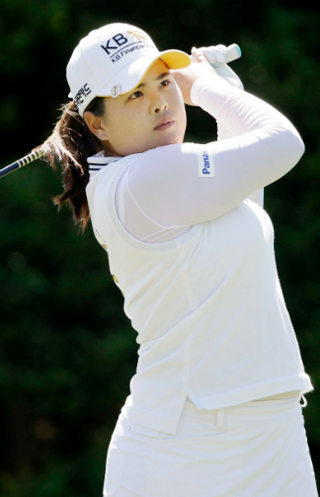 The best seasons for Korean golfers on the LPGA Tour were in 2006 and 2009, when they collected 11 victories. Korean ladies have won 10 tour events each of the past two years.

With 22 LPGA Tour events remaining this season, Korean women have a good chance of having their best year ever.

Why have Korean players been so dominant this year?

According to Park, Korean women are motivated by the chance to compete in the 2016 Olympics in Rio de Janeiro, where golf will be an Olympic sport for the first time since 1904.

“I don’t know the exact reason, but probably because players are concentrating really hard on participating in the Olympics next year,” said Park, according to Yonhap News Agency. “In order to participate in the Olympics, you have to get good results in LPGA Tour events and major tournaments to move up in the world rankings.”

Experts say Park’s explanation seems reasonable considering Koreans’ pride in representing their country. At stake is not only the honor of being the first Olympic women’s golf champion, but a pension from the Korea Sports Promotion Foundation.

In Rio de Janeiro, golf will be presented as an official sport for the first time since 1904 with 60 players qualifying for the both the men’s and women’s events based on Olympic Golf Rankings from the International Golf Federation (IGF) as of July 11, 2016.

The top 15 in the world qualify automatically, with a limit of four per country. Remaining spots will go to the highest-ranked players from countries that don’t have two golfers qualified.

According to IGF rankings, Korea is currently the only nation with four players in the top 15: Park (second), Kim Hyo-joo (fourth), Ryu So-yeon (seventh) and Amy Yang (10th). 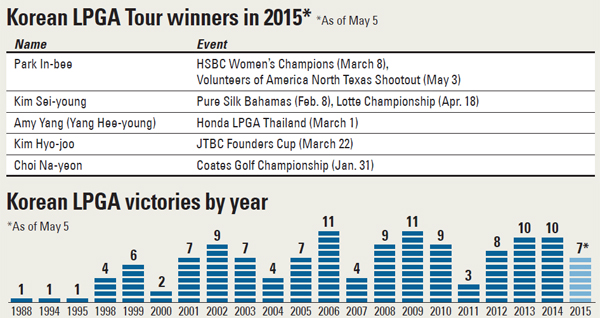 “Players see the qualification period for the Olympics as already under way and we are motivating each other to concentrate more on our game,” said Park, who has 22 career LPGA wins.

Another factor in the success of Korean women this year is the number of impressive rookies on the LPGA Tour.

After the success of Hall of Famer Pak Se-ri, Korean golfers have rushed to United States, with 40 on the LPGA Tour at one point.

Kim Hyo-joo, who claimed a major title by winning the 2014 Evian Championship in September, and Baek Kyu-jung, who won the KEB-HanaBank Championship in October, have joined the LPGA Tour as full members. Kim Sei-young and Jang Ha-na earned their spots through qualifying school. There are now 28 Koreans on the LPGA Tour.

Kim Sei-young has already won two tournaments, while Kim Hyo-joo finished on top at the JTBC Founders Cup in March.

“Rookies on the LPGA Tour this year like Kim Sei-young and Kim Hyo-joo are really motivating the players who have been here for a while,” said Park. “Watching their performance makes us think we can’t afford to stand still.”