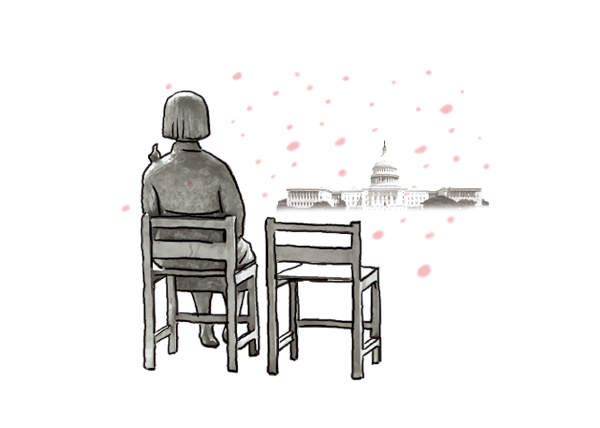 It is always poignantly entrancing to watch pink and white cherry blossom petals fall and scatter. One cannot but think about the passing after full bloom with a pang of pathos. Kamikaze pilots flew to their death in suicide missions on bombers marked with cherry petals during World War II believing their sacrifice would not be in vain. The day Shinzo Abe became the first Japanese prime minister to address a joint session of the U.S. Congress, the white blossoms, a gift from the Japanese before the war, formed white clouds in their full bloom around the Tidal Basin.

Abe was warmly welcomed by Congress. He received a standing ovation more than 10 times from the packed floor. The U.S. Congress and President Barack Obama, in exchange for a strong military alliance and security contribution from their staunchest ally, condoned and encouraged Abe’s campaign to reinterpret the pacifist constitution.

The two countries were in celebratory mood over the new Guidelines for Japan-U.S. Defense Cooperation. For Abe and Japan, it was emotionally triumphant moment as the new security pact allows empowerment of Japanese military and freedom to act unilaterally in defending itself and allies for the first time in 70 years. Abe did not hide his excitement and appreciation. During his address to the Congress, he said peace and security of the postwar world could not have been possible without American leadership and that “it makes me happy all the time that Japan of years past made the right decision” to go in the “path for Japan to ally itself with the U.S. and go forward as a member of the Western world.”

The United States warmly embraced Japan as it moves past atomic attacks and military occupation. It fast-forwarded the wartime period of conflicts and battles and rekindled prewar cordiality, when the two countries commanded predominance on each side of the Pacific. What they do with their bilateral relationship is their affair. But what about countries that still bear bitter and painful war memories? If the past imperialist powers are forming new alliance, they should at least repent for the aggressions and crimes imperialism inflicted.

No one doubts that the U.S. had dominated over other countries through indirect bureaucratic means and Japan through direct military rule. Direct rule came entirely from the omnipotent power of the emperor. There was no restraint in the brutal and arbitrary force. Japan can only earn a democratic stamp after it thoroughly and truthfully confesses all its wrongs and crimes it had committed on its neighbor countries. It must explain why it had victimized Koreans in its war against the West and seek understanding and forgiveness.

Before paying tribute to the war memorial for American soldiers, the Japanese leader should have bowed deeply to thousands of Koreans and Chinese who were forced to fight and die for Japan. Instead of using the vague language to express “deep remorse” and causing pain to Asian people, Abe should have used the landmark moment on the U.S. congressional podium to specifically and directly address wartime atrocities. The issue of comfort women may be an ear-sore for the Japanese, but it is the symbol of imperialist crime and excesses. Abe, however, referred it as human-trafficking or common abuse of women during war, and made no mention of Nanjing massacre.

Masao Maruyama, a leading Japanese political theorist, pinned the Japanese reasoning and psychology as “self-deceiving” The Japanese thought is all muddled in past and present contradictions. There is no core backbone on morality. The emperor had been the embodiment that justifies the cause for all Japan’s doings and sanctuary to hide all accountabilities in communal plot. The past has been edited and even cut out for convenient excuse for the present and shortcut to the future.

Maruyama calls this postwar legacy in Japanese thought as “the system of irresponsibility.” Erasing what’s uncomfortable and replacing it with something is new is Japan’s pathological habit. It is why Japan insists that it has apologized and done enough. It is what led Abe’s condescending remark that Japan has “devotedly poured in capital and technologies to support” growths of Korea, Taiwan, Southeast countries and China.

In Washington, Abe may have won applause for his cool confidence, but he stirred resentment from neighbors for the kind of special pardon he earned for Japan’s past.

The cheer was not unanimous Twenty-five U.S. congressmen issued statement urging Japan to formerly reaffirm and validate apologies for wartime aggression and colonial rule. Some of the veteran politicians would still remember the Tokyo war crime trials. When Hideki Tojo, wartime prime minister, was asked who had commanded the attack on Pearl Harbor in the trial, he answered that he was just a subordinate that took order in the title acting as the prime minister. It had been a shamefully hollow answer given by the commander of a war with blind mission to stretch Japanese power across the world through military force.

When Brigadier Henry Nolan, vice-judge advocate general, probed Iwane Matsui, commander of the Shanghai Expeditionary Force, who had been responsible for the Nanjing attacks, he also denied it had been him. Prosecutors went crazy trying to find people who can answer for the war planning, authorization, and crimes.

Koreans, too, have reached their limits in hopes to hear sincere apology for colonial and war aggressions from the Japanese. All their wrongdoings have been buried with the death of Japanese fascism which had blindly followed the order of the deity-like emperor. With schemers of brutal rule now dispersed in the realm of oblivion, there is no one left in today’s Japan that can account for the past. There had been a few exceptions like former Prime Minister Tomiichi Murayama and Yohei Kono, former Chief Cabinet Secretary, who tried to break out of the “system of irresponsibility.” We also hope the conscience in America is not limited to the 25 congressmen.

*The author is a professor of sociology at Seoul National University.