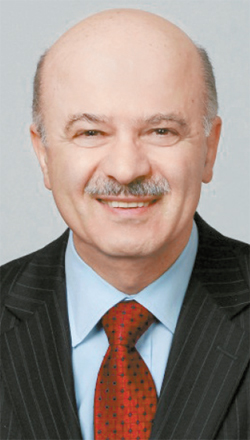 Korea recently struggled with the controversial decision by the nation’s nuclear authority to keep the country’s second-oldest reactor, operating since 1983, open for another decade.

The Korea JoongAng Daily sat down Thursday with Ontario Minister of Research and Innovation Reza Moridi of Canada, a nuclear engineer who served at the Radiation Safety Institute of Canada for 17 years, to hear his views about the lifetimes of nuclear reactors and the future of Korea’s nuclear industry. Moridi was visiting Korea to participate in the 30th Annual Conference hosted by the Korea Atomic Industrial Forum and Korea Nuclear Society.

He said that it is safe to extend the lifetime of nuclear reactors as long as maintenance standards are strictly maintained, saying, “Refurbishment doesn’t mean recycling; it is a process of making a completely new nuclear reactor.

“It is like an old car becoming new by changing the engine, a key part that becomes worn out most easily. Extending is possible only when it is technically and economically feasible.”

Moridi also said that Korea’s use of both the CANDU reactor and its own light-water reactor technology, which it imported from the United States and further developed, can be the future of the Korean nuclear industry.

“Korea has its own strength, of owning CANDU and light-water reactor technologies from the United States,” said Moridi. “If Korea develops technologies to join the two, such technology can be Korea’s new strength, which can be also exported to other countries. Korea will be the world’s first and only country that has such technologies. That should be the new growth point for the Korean nuclear industry.”

Q. What has been the key to Canada’s successful, continued use of nuclear power, which is a clean source of energy but can be dangerous if mismanaged? And how has Canada maintained the public’s support of nuclear technology overall?

A. Canada has worked for more than 70 years on nuclear energy - particularly with its CANDU reactors, which is a unique technology - but also on other applications of nuclear technology in medicine and various other industries. There is radiation therapy, where nuclear materials are injected into blood to take photos of circulation, and they are also used in the glass and plastic manufacturing industries to measure the strength of materials. Nuclear technology has been used to measure the amount of liquid or contaminates in the cigarette or drink-bottling industries. So, the technology has been widely used in a variety applications, and Canada has been a pioneer in this area.

In terms of the public acceptance of nuclear technology, a clear fact is that nuclear is new compared to other technologies that have existed for centuries. Nuclear technology has existed for only 70 to 80 years. So, there hasn’t been enough time for the public to understand it. As technologies can be used in positive, constructive ways and also destructive ways, the helpful aspects deserve more spotlight as much as negative aspects do.

I think people should know nuclear technologies can be safely managed, and they mostly have been safe.

Among 450 nuclear reactors in operation in the world, there were only two reactors that were involved in serious accidents, one at Three Mile Island in the United States, which had no impacts on humans, and another in Chernobyl, Russia [now Ukraine], caused by old Soviet technology and a poor work attitude.

When it comes to the Fukushima accident, the main cause was natural disaster, which happens all the time. If the accident happened to a chemical plant, the impact would have been even more severe because a nuclear power plant is much more confined and strictly regulated than any other type.

Also, I think people are sometimes afraid of radiation, because they are not aware of the fact that we’ve always lived with radiation from natural sources such as sun and the Earth, and from activities such as flying in an airplane.

Of course, too much radiation is harmful, but I think the public generally are not aware of this fact and should be more actively educated.

Korea has exported its own light-water reactors to countries like the United Arab Emirates, but it recently suffered corruption scandals with its reactor parts, cyberattack threats, the leakage of reactor blueprints and the operation extension issue of Wolseong 1. The Korean public is wary of nuclear power plants, even if the technology is well-developed. As an engineer-turned-politician, please give us some advice about what should be done in Korea to regain trust.

These two factors are something operators should pay more attention to, whether or not there is public skepticism about nuclear power. They have to be open and transparent about what they do, and try to educate the public with expert information.

That raises the confidence among the public about the nuclear power, and raises credibility of authorities in Korea.

Last, but most important, detailed maintenance and strict regulation are key to managing nuclear reactors. If a pipe leaks inside a nuclear power plant the operators should report it, whereas in ordinary power plants they don’t have to.

Unlike Canada, Korea is a small country with a high population density. This makes the disposal of spent nuclear material a much bigger concern for us, and heavy-water reactors like CANDU produce a much larger volume of nuclear waste. What should Korea do to better manage this waste?

Waste management is one of the largest issues in the nuclear industry across the world. But Korea is fortunate to be operating two types of nuclear reactors, CANDU and light-water reactors.

I would encourage Korea to consider using Canadian technologies to reuse the spent fuel from the light-water reactors in the CANDU reactor. Through this method, you can use the uranium fuel twice.

At the end of the day, Korea can reduce the volume of nuclear waste by half. This helps Korea to also reduce its import dependency on uranium.

Also, when the spent fuel comes off the light-water reactor, it is much hotter than that from the CANDU reactor. It requires so much more space for storage. Spent fuel from CANDU reactors, on the other hand, is cooler and can be stored more compactly, side by side.

Since Korea already has both kinds of reactors, the country just requires some changes to policy and technical adjustments to connect the two systems.

Has there been progress in the memorandum of understanding made last year between the Ontario nuclear industry association and its Korean counterpart?

Regarding the third MOU, I think the two parties will discuss technologies and opinions about refurbishment of old reactors. The Wolseong 1 reactor already has been refurbished, while Canada also recently extended the lives of two reactors - one from OPG and another from Bruce. We’re also planning to refurbish the remaining ones within few years, making the issue of life extension a major nuclear activity in Ontario. This will cost us millions of dollars.

However, when compared to light-water reactors that have to be decommissioned after reaching the designated lifespan, CANDU reactors are much more cost-efficient because they are more suitable for life extension by replacing parts.

Have there been any Canadian reactors that were permanently closed?

Yes, three of Canadian reactors were permanently shut, one in Quebec and two in Ontario. The economic feasibility tests showed these reactors were too old, so refurbishment would cost too much money. But if the refurbishment costs lower in the future, the three reactors could resume operation.

During this visit, Canadian delegates and Korean officials discussed renewable energy and energy management technologies. Is Canada attempting to reduce its energy dependence on nuclear power?

No, we’re not intending to reduce our dependence on nuclear power. Nuclear power is Canada’s main source of power, and such policy will stay unchanged.

Currently 60 percent of Ontario’s energy comes from nuclear, and our policy is to maintain the level at least 50 percent. The rest of the power will keep coming from hydro, solar, wind and gas.