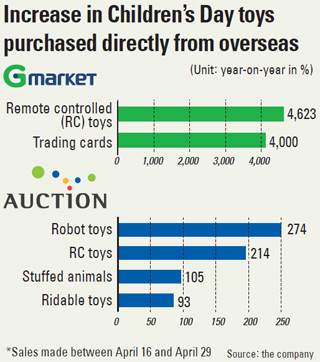 According to Gmarket, a local subsidiary of eBay, parents flocked to its direct overseas purchasing section, where retailers receive orders for products sold in countries like the United States, Japan and Denmark.

From the period between April 16 and 29, when many parents get their Children’s Day shopping done, sales of remote-controlled toys at Gmarket’s direct overseas purchasing section jumped more than 4,600 percent year-on-year. Sales of popular trading cards rose 4,000 percent.

Overall sales at the site’s overseas direct purchasing section were up 82 percent compared to a year ago during the same period.

According to Gmarket, the best-selling toys were the Bandai Yo-Kai watch from Japan, and the Lego Marvel Super Heroes and Disney dolls from the United States.

Auction, an online retailer that is also owned by eBay, said sales of robot and remote-controlled toys through its direct overseas purchasing jumped 274 percent and 214 percent.

Sales of stuffed animals were up 105 percent, and toys like bicycles and small cars climbed 93 percent.

Japan, the United States and Denmark were the three countries that received the most orders, as popular toy brands were cheaper there.

A regular retailer at Auction sells the Lego Hulk Buster Smash for around 95,000 won ($88), while its direct overseas purchasing section sells it for less than 50,000 won.

“We are seeing more customers looking to buy foreign toys, and are doing so through our direct overseas purchasing offers,” an employee at Auction said.