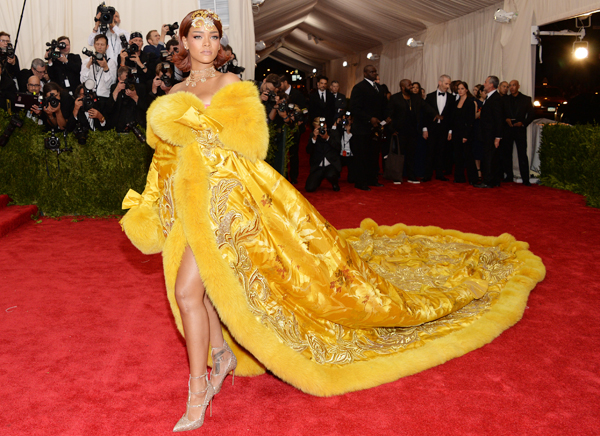 NEW YORK - Never let it be said that Rihanna doesn’t know how to make an entrance.

On a night when big stars were a dime a dozen - try George and Amal Clooney, Lady Gaga, Madonna and Cher - the pop singer still managed to pull the red carpet out from under the rest of them at the Met Gala on Monday when she swooped in wearing a fur-trimmed yellow cape with floral swirls of gold and a train so long it required three wranglers.

The ensemble came with a little pink mini-dress underneath, and a sparkling tiara. In keeping with the evening’s theme - China, and its artistic influence on the West - the outfit came from Beijing-based designer Guo Pei, whose sumptuous designs also are on display in the current Metropolitan Museum exhibit, “China: Through the Looking Glass.’’

As befitting a star - or fashion royalty - Rihanna commanded premium attention on the carpet by being one of the very last to arrive. But compared to another A-lister, she was an early-bird.

Beyonce and her husband, Jay Z, arrived so late that many photographers were giving up and leaving. She was highly photogenic, though, in an ultra-sheer, bejeweled Givenchy Haute Couture gown by Riccardo Tisci.

Deep, ruby reds, shimmery golds and other jewel tones dominated the color scheme as the multitudes of invited celebrities embraced this year’s China inspiration. There were sequins aplenty, and embroidery was everywhere.

One of the first to arrive was the gala’s longtime head, Vogue editor Anna Wintour, who sported an orange-and-red floral couture gown from Chanel. She was followed by a succession of stars from film, music, fashion, TV and even sports unrivaled anywhere but perhaps the Oscars.

As actress Kate Hudson noted: “It’s like Oscar night for the fashion world, but without the pressure of who’s going to get an award.’’ Hudson was dressed in a sleek gown of gold sequins, by Michael Kors.

One of the biggest stars of the evening - and a surprise, until the last moment - was Cher, in an understated (relatively) sequined Marc Jacobs gown in gray and purple with a vaguely floral motif.

There were also a number of Chinese celebrities in attendance, perhaps chief among them actress Gong Li, who offered a girlish tilt of her head as she waved in a deep red velvet gown with black lace and a fan design. Celebrated film director Wong Kar Wai was there as the Met exhibit’s artistic director.