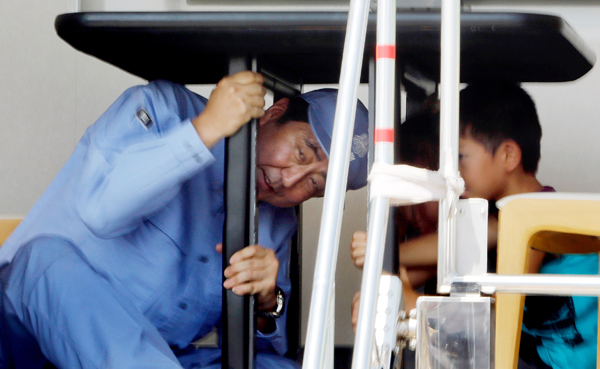 “I realized that we can’t win over nature,” said a 66-year-old Japanese man.

He lived by the sea all his life and lost everything four years ago. His wife, mother and grandchild were swept up in a tsunami. 22-meter (72- foot) waves came over the 6.4-meter-tall levee and destroyed the village. 1,280 villagers died or went missing, but he still opposes building a 14.5 metertall seawall. He will not see the ocean any more.

The documentary film “Akahama Rock’n Roll” premiered in Shinjuku, Tokyo on May 2. It depicts the restoration process of the residents of Akahama, Iwate Prefecture, which suffered devastating damage from the 2011 Tohoku earthquake and tsunami.

Filmmaker Haruko Konishi said that he could not forget a local resident who said, “Just like salmon going back to the river in the fall, we have to go back to our hometown.”

To the Japanese, nature is the hometown to which they must return.

On April 10, hundreds of dolphins were beached on the northeastern coast, and most of them died.

“I heard it could be a premonition for earthquake,” my friend told me. “My parents are planning a trip to Japan, and we are concerned.”

“Well, I don’t think you should be worried,” I responded.

Surely such a strange occurrence was not indicative of an incoming natural disaster, but three days later, a 6.8 magnitude earthquake occurred in the sea south of Okinawa. Fortunately, it did not lead to much damage.

Living in Tokyo for 10 months, earthquakes have become a part of life. Every month, I can feel the earth move one or two times. I was terrified the first time the earth began to shudder; I was having lunch on the top floor of a two-story restaurant made of wood. It is hard to accept that earthquakes could happen anytime. Japanese people don’t discuss the risk of earthquakes openly, and there is no clear solution. The affluent make plans to move abroad upon retirement. Otherwise, the only option is prepare an emergency bag with a helmet, water, food and radio. People have earthquake drills and thoroughly check earthquake resistance levels when choosing their home.

Recently, a forecast announced that the chance of an earthquake with a magnitude of 6.8 or higher in the Kanto region in the next 30 years is 50 to 60 percent. I asked a Japanese friend if he is afraid.

But then he added: “We cannot prevent an earthquake with human forces.”

*The author is the Tokyo correspondent of the JoongAng Ilbo.