Car sharing takes off from Jeju to Seoul

Car sharing takes off from Jeju to Seoul 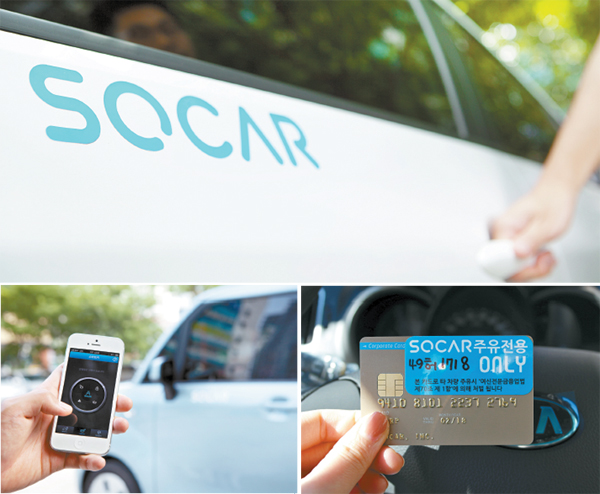 SOCAR, a car-sharing service, allows users to rent vehicles parked at lots in 52 cities around the country, including Seoul, Busan, Daejeon and Gwangju. In order to use the service, consumers need to download an application provided by the company and register with a credit card. Provided by the company

When Kim Ji-man told his friends that he was planning on quitting his job at an investment bank to create Korea’s first car-sharing business, they tried to stop him. The business was too risky, they said, with the possibility of unscrupulous customers who might steal cars or lie about getting into accidents. Besides, though companies like ZipCar had been around for nearly 14 years overseas, existing rental companies in Korea had already predicted that demand for a similar sharing service would be low.

But the 39-year-old held his ground, saying that such a service would do well and that the problems his friends foresaw would be resolved by utilizing smartphones and social networking services (SNS).

In November 2011, Kim established SOCAR in Jeju. Kim said the island was ideal for a car-sharing service because many residents own multiple cars to compensate for a lack of public transportation. Rent-a-car services existed on Jeju, but were only popular in the summer vacation season.

But the prime conditions didn’t make things easy at first.

“There were so many barriers, particularly on government regulations, one of which said a car-sharing business operator must own 100 cars to launch the business,” Kim recalled. “It also only allowed businesses to lend cars at designated places like airports and ports.”

After dealing with government officials and regulations, he eventually started the service in March 2012.

After downloading SOCAR’s smartphone application, a user can reserve a car for a specific amount of time via their mobile device. The door of a car can be opened by the application and the user returns the car to a parking lot designated by the company.

Consumers initially rent a car for 30 minutes and the service can be extended in 10 minute intervals. The GPS attached to the car automatically calculates the driving distance and the amount of fuel used. Using Hyundai Motor’s small sedan Avante for 30 minutes, for instance, cost about 3,940 won ($3.65) excluding the 170 won charge per every 1 kilometer (0.62 mile) of driving distance. The service automatically charges a customer’s credit card through the application.

The company then decided to enter Seoul. The strategy was to create car-sharing communities on the Internet. The company organized off-line meetings with loyal customers to hear their opinions about the service, and shared photos of satisfied users in borrowed cars at drive-through restaurants and drive-in movie theatres on SNS such as Twitter and Facebook.

One of the key factors behind the company’s success was its ability to secure parking lots in popular spots that people could easily access.

“This business is based on smartphones and SNS, but it isn’t as elegant or technological as it sounds,” said Kim. “Since we couldn’t only rely on public parking lots, we had to deal with people at apartment complexes, universities and private parking lot owners.”

The efforts paid off. The service is currently available in 52 cities including Seoul, Busan, Daegu, Daejeon and Gwangju, and there are 1,400 SOCAR zones for 2,400 cars. The company currently has 600,000 members using the service, which was increased by about seven times from a year ago.

SOCAR continues to grow rapidly. According to the company, the service’s revenue for last year was 14.7 billion won, a 588 percent rise from its 2.5 billion won in 2013. The operating loss was 1.49 billion won, which stayed at a similar level from a year ago. The net loss also increased from 1.53 billion won to 1.73 billion won last year.

The question is whether the market will keep expanding alongside the company. Competitive car-sharing services were also offered by large rent-a-car companies like KT Rental in 2012, but the total market size was only 30 billion to 40 billion won as of last year. Some worry that the market will become oversaturated.

Kim, however, said he’s positive about the business. “We currently have more than 1.5 million members and expect to have 2 million by the end of the year. The number of cars we would have until next year is 5,000 and we think we can make more than 100 billion won in sales. Our next goal is to launch the business in the global market.”