After betrayal comes hope for a better future

After betrayal comes hope for a better future 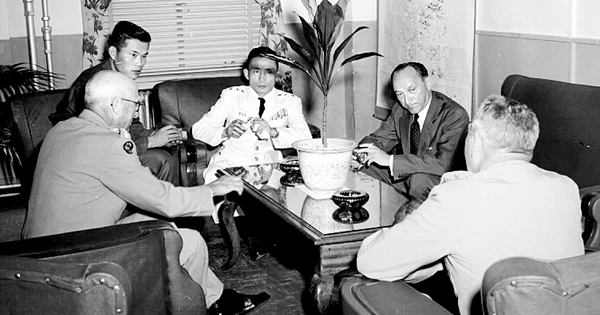 Park Chung Hee, Chairman of the Supreme Council for National Reconstruction at the time, attends a meeting with U.S. officials. To Park’s right is then-U.S. Ambassador to Korea Samuel Berger while Guy Meloy, the former commander of the U.S. Forces in Korea, sits far left. [JoongAng Photo]

A few days after I briefed Park Chung Hee on the arrest of Hwang Tae-song, a self-proclaimed secret envoy from Pyongyang, Peer de Silva, the Seoul bureau director of the U.S. Central Intelligence Agency, came to visit me. He was aware that we had Hwang in custody and demanded that he be handed over to the CIA’s Seoul bureau for further investigation. I told him we had not yet finished our questioning and that we would let them have him once we were done.

About three weeks later the bureau director came to me again, reiterating his demand for Hwang. I fulfilled his wish and had him promise that Hwang would be sent back to us once the CIA’s Seoul office finished its probe.

From the beginning, Washington was suspicious of Park’s ideological leanings, especially given that he was indicted for leading a Communism cell in the military and almost ended up on death row. I assumed the CIA was trying to reveal any traces of socialist tendencies within Park by questioning Hwang, though there was nothing to be found.

Knowing this, I wanted to wrap up the Hwang matter as quickly as possible by prosecuting him on charges of espionage, in order to protect Park from baseless suspicions. It was no secret at the time that some military officials were trying to conduct a smear campaign against Park by accusing him of following socialist ideas.

The Korean Central Intelligence Agency (KCIA), which I founded and led as its first director, referred Hwang to a military court on charges of espionage on Dec. 1, 1961. In the fall of 1963, Yun Po-sun, who ran against Park in a presidential race, waged an ideological campaign using the Hwang Tae-song case, claiming that Hwang came to the South to help Park get elected. Yun continued his unfounded ideological crusade against Park until election day. Park defeated Yun by a small margin of 150,000 votes.

After Park was elected, the CIA stopped asking to question Hwang further. I suspect the agency was planning to use him in a campaign to oust Park from politics if he lost the election. 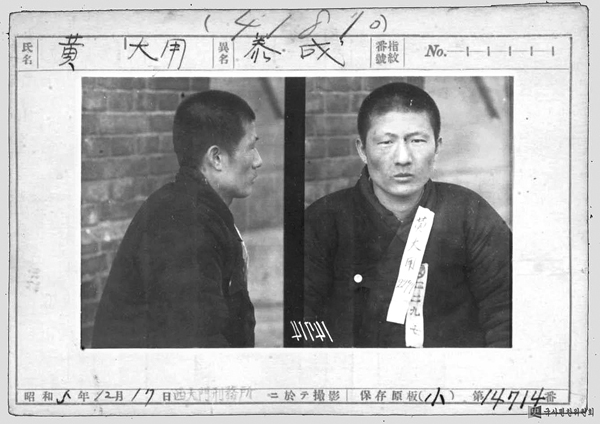 Mugshots of Hwang Tae-song at age 24 in 1930. He was arrested for violating the public order act. [JoongAng Photo]

When I handed Hwang over to the CIA’s Seoul office, I also gave the agency all the information we had extracted from him during a probe. Later, I asked a CIA official to do the same for us. The representative told me they had discovered nothing new in addition to what we had given them.

On Oct. 22, 1963, the Supreme Court upheld a death penalty ruling for Hwang on charges of spying for the North. On Dec.14, Hwang was executed by a firing squad. A reporter who covered the Ministry of Defense watched the execution in order to quell suspicions that Park had sneaked Hwang out of the country.

When Hwang was executed I was a lawmaker who had been chosen a month before in a general election. I watched Park, who would be inaugurated as president four days later, receive the briefing on Hwang’s execution. He said nothing except, “They did it. OK,” and nodded. I assumed that anything else he said would have sparked groundless rumors about his relationship with the man.

I am sure, however, that Park must have felt conflicted about allowing Hwang to be executed because during his childhood he thought of him as a brother. But Park endured that emotional suffering, and I did not ask him how he felt about Hwang’s ill fate.

False rumors about Hwang exist to this day. One was sparked by Kim Hyung-wook, the second director of the KCIA, who said in his memoir that he had persuaded Park to execute Hwang in a speedy manner. But this was nonsense. Hwang received the death penalty after legal procedures had been followed. There was no room in the proceedings for the spy agency chief to meddle.

To this day, I believe Hwang was sent by Kim Il Sung as a spy to talk Park into merging the South with the North under the Kim regime’s command. Kim must have believed Hwang could make it happen because of his childhood relationship with Park.

When I think of the Hwang case, I recall the Korean Broadcasting Station launching in 1961. In the summer of that year I discussed starting the country’s first TV station with Oh Jae-kyung, who was the public information minister at the time. About two months before the official opening, we began construction on the station. My desire to build it stemmed from my visit to Tokyo the same year where I saw that every household had a TV antenna. I was deeply envious of Japan’s high living standards and was determined to make Korea just as modern.

Though we began work on the building, we had no funds to purchase broadcasting equipment such as cameras. But then I recalled the $200,000 we had confiscated from North Korean spies that were busted by the KCIA. The cash included some from Hwang.

While giving Oh the money that once belonged to Pyongyang, I asked him if he could purchase all the equipment necessary to launch the channel by Dec. 24. He said he would try and he bought broadcasting equipment from the United States. In other words, Kim Il Sung contributed to the launch of KBS.

KBS aired its first program at 6 p.m. on New Year’s Eve, 1961, Park Chung Hee, then-Chairman of the Supreme Council for National Reconstruction, attended the launch ceremony with other members of the cabinet.

During the event, I told Park we had used the money confiscated from North Korean spies to buy broadcasting materials. He looked somewhat dumbfounded and said, “Sometimes you do stuff that is totally out of the blue.”