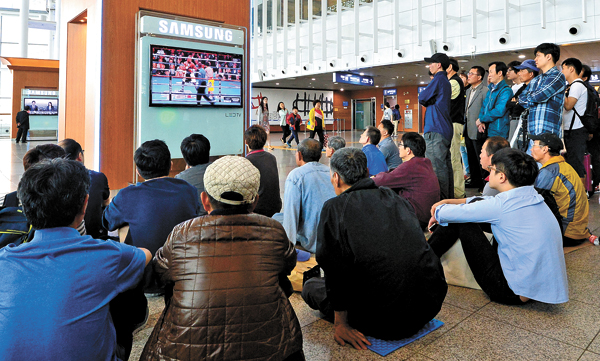 People watch the match between Floyd Mayweather Jr. and Manny Pacquiao on television at Seoul Station on Sunday. [NEWSIS]

The most expensive bout in boxing history - Floyd “Money” Mayweather Jr. versus Manny “Pacman” Pacquiao - turned out to be duller than expected.

Some fans praised Mayweather’s cautious and strategic style, but many others criticized that if this was the “fight of the century,” perhaps boxing isn’t that entertaining after all.

But whatever people thought about the fight, it certainly focused the world’s attention on boxing, and Korea was no exception.

Korean fans were able to easily watch the bout as it was broadcasted on SBS and streamed on the web portal Daum, and tune in they did.

The data from Nielsen Korea showed that the rating for SBS’s special program for the fight, which was broadcasted 11 a.m. to 2 p.m. on Sunday, reached 12.3 percent nationwide, which was No.1 during that time period.

However disappointing the actual match was, it made clear that Koreans are still keen on boxing.

Boxing has been one of the most beloved sports in Korea, as the country produced star boxers like Hong Soo-hwan, Chang Jung-koo, Park Chong-pal and Yuh Myung-woo in the 1970s and ’80s.

Coming into the 2000s, however, Korean boxing’s popularity waned as stars retired and friction between boxing’s local governing bodies failed to produce good matchups. Many Korean fans turned their back on boxing and moved onto other combat sports like mixed martial arts.

The Mayweather-Pacquiao match seemed to rekindle some of that former passion. Local boxing fans and even people unfamiliar with the sport gathered together to see the bout. But despite the enthusiasm, there’s still a lack of attention paid to Korean boxing, and this most recent match is a good opportunity to begin revitalizing the local boxing community.

Bae, who also goes by ring name “Yuh Myung-goo,” will travel to Bangkok for the June 2 bout. The 35-year-old currently holds the interim World Boxing Organization light flyweight (under 49 kilograms) title and is the current Pan Asian Boxing Association flyweight (under 51 kilograms) champion.

Bae’s challenge is especially welcome because no Korean boxer has been a world champion in the last five years, not only in major boxing bodies like WBC, World Boxing Association (WBA) and International Boxing Federation, but also in minor organizations.

If Bae beats Menayothin next month, he will be the first Korean boxer to hold a world title since Kim Ji-hoon, who became International Boxing Organization (IBO) champion in September 2009.

As if Bae isn’t compelling enough, the boxing community should also gather around Gennady Golovkin, the half-Korean boxer from Kazakhstan who holds the middleweight titles in the WBA and IBO and is the interim middleweight champion of the WBC.

The fight of century might have bored local boxing fans, but it also came at a great time to galvanize the local community. If boxers and promoters can come up with interesting matchups and pay attention to up-and-coming champions, reviving Korea’s once-popular sport doesn’t seem to be a difficult issue.