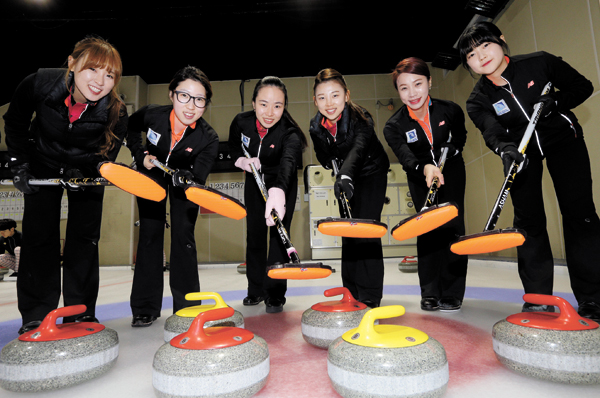 In the Sochi Winter Olympics last year, the Korean women’s curling team finished eighth among 10 teams with a record of three wins and six losses, but its fighting spirit attracted attention.

After the Winter Games, the team was in danger of being disbanded, but it is back on the ice to represent Korea again after winning the 2015-16 season national team selection trial April 20.

For curling, Korea picks one team to represent the country since the sport requires accuracy and teamwork. The Gyeonggi team saw 37-year-old Shin Mi-sung retire, but her position was filled by Yeom Yoon-jung, while 18-year-old Seol Ye-eun also joined.

Before the Sochi Winter Games, curling was a sport largely unknown to the Korean public. Players said that sometimes they were even treated as cleaning women because of their curling brooms. However, the sport’s popularity has been rising since Sochi.

In the Olympics, team members shouted, “Sister, it’s all right,” to cheer each other up when they made mistakes. In March 2014, they reached the semifinals at the World Women’s Curling Championship in Canada.

However, after the Worlds, the team endured a serious scandal involving its coach, who was accused of verbally abusing players and sexual harassment. The Korea Curling Federation suspended the coach for life.

Then captain Kim Ji-sun got pregnant, and the team withdrew from the national selection competition last year. This year, however, the team came back in a big way, winning all nine of its matches.

The Gyeonggi team is known for each member’s interesting career before joining the team.

After watching her high school curling team get disbanded, Lee Seul-bee worked as an assistant teacher at a kindergarten. Gim Un-chi was a speed skater until she got injured in high school.

A year after the scandal, many things have changed. Kim, who is married to Chinese curler Xu Xiaoming, is a mother. Lee also got married.

Even with the changes in the personal lives of its members, the team has been working hard at the Taeneung Training Center in Seoul, where it was easy to hear shouts of “yap,” “hur” and “whoa.”

“In curling, there has to be good partnerships, just like what pitchers and catchers are doing in baseball,” said Shin. “Only four of the six team members can play the match, but they are all like sisters, supporting each other.”

Curling is one of sports in which Korea is expected to medal at the 2018 Winter Olympics in Pyeongchang. Team members say they have left behind the joy of Sochi and are looking forward to winning a medal in 2018.

“I think our level of play is where we can expect to win one match out of three against Scotland, where the sport originated, and Olympic champion Canada,” said Lee. “From now on, we will try to reach the level where we could win two and lose one against those countries.”

Kim, the captain, wants her team to resemble the 2008 movie “Forever the Moment,” inspired by the Korea women’s handball team in the 2004 Summer Olympics that won the silver medal.

“I watched the movie with my teammates,” she said. “We want to write our version of ‘Forever the Moment’ on the ice.”